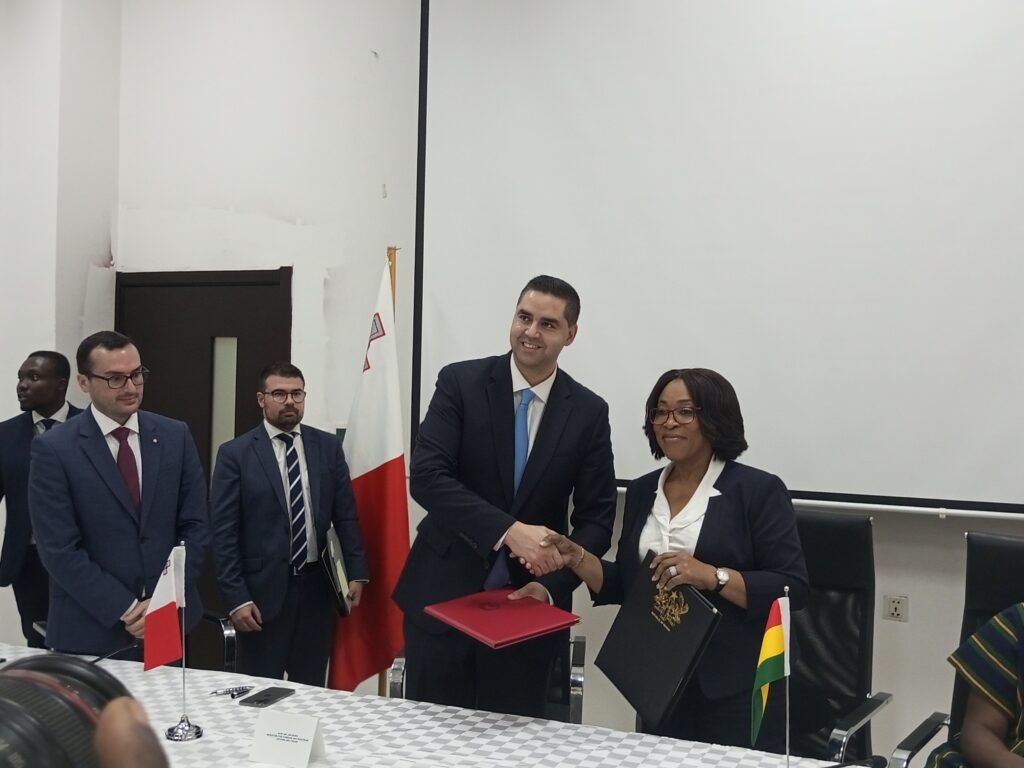 Ghana and Malta Friday signed four Memoranda of Understanding (MoUs) on Cooperation, Sports and Youth Development, Fisheries and Education in Accra to improve Maltese assistance to these sectors and enhance their activities.

Madam Botchwey and Dr Borg signed the Ghana–Malta Permanent Joint Commission for Cooperation (PJCC), while Mr Mustapha Ussif, the Minister of Youth and Sports, signed the MoU on Sports and Youth Development.

The MoU on Fisheries was signed by Mr Moses Anim, the Deputy Minister for Fisheries and Aquaculture Development, while that of Academic Cooperation between the Mediterranean Academy of Diplomatic Studies, University of Malta and the Legon Centre for International Affairs and Diplomacy (LECIAD), University of Ghana, was signed by Professor Emmanuel Debrah, Director, LECIAD.

Madam Botchwey noted that Ghana treasured the strong relations between the two countries, a relation that dates back to the early 1970s.

She recounted the numerous bilateral cooperations including the visit to Accra by the then Maltese President, Marie-Louise Coleiro Preca in 2017, which was reciprocated in 2019 by President Nana Addo Dankwa Akufo-Addo.

She said Otumfuo Osei Tutu II, the Asantehene, and Nana Otuo Siriboe II, the Chairman of the Council of State, were in Malta for a visit.

Madam Botchwey said those high-level visits saw the signing of agreements and MOUs on Bilateral Cooperation, Avoidance of Double Taxations, and Visa Wavers for diplomatic and service passports.

She lauded Dr Borg on the commissioning of Malta’s High Commission building in Accra, which solidifies Malta’s presence in Ghana and also commended him for leading 50-member business delegation to Ghana.

Linking the private sectors of the two countries was extremely important because they needed to see very tangible results of their cooperation in terms of economics and trade investment ties, to make Ghana and Maltese relations visible, Madam Botchwey said.

“We want your businesses to see Ghana not just as a market of 31 million people but a Ghana that is a steppingstone into the West African market, which is over 300 million,” she noted.

“And also, to see Ghana, even more as that stepping stone into the 1.3 billion market of the (Africa) Continental Free Trade Area (AfCFTA).”

Touching on the Permanent Joint Commission for Cooperation, Ghana’s Foreign Minister said appending their signatures meant that they were endorsing the work of the Commission for implementation.

She said Ghana was working towards opening direct air transport between Accra and Valletta, the capital of Malta, and expressed gratitude to Malta for providing scholarships to Ghanaian students and donating vaccines to Ghana.

Madam Botchwey congratulated Malta for being part of the United Nations Security Council (UNSC) as a non-permanent member and where members would be working together to make the world a better place.

Dr Borg, on his part, commended Ghana’s democratic credentials and for being a shining example in the Sub-region.

He said Malta opened her first Embassy in Sub-Saharan Africa in Accra because Ghana was the most politically stable country in the region.

He noted that the high-level visits between the two countries spoke volumes, coupled with the MoUs, which indicated the wide areas of bilateral collaboration.

Mr Ussif, in an interview with the Ghana News Agency, said the MoU on Sports and Youth Development would enhance exchange programmes between the two countries.