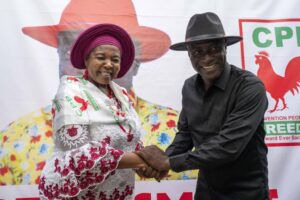 Broadcast Journalist, Blessed Godsbrain Smart, popularly known as Captain Smart, has returned to the Convention People’s Party (CPP) as a member after 16 years.

Captain Smart officially joined the CPP in 2006 and contested the Party’s Ashanti Regional Chairmanship position in 2007 but lost the race.

According to the Party, the broadcast journalist, currently the host of Onua Maakye on Onua TV, did not play any active role in the Party and also defaulted in payment of dues since 2007.

As part of the CPP’s membership drive to reorganise the Party and bring back all former members of the Party, the leadership of the CPP has been rallying prominent individuals in Ghana and in the diaspora to revisit their roots.

At a brief ceremony at the Party’s Headquarters in Accra on Thursday, Nana Akosua Frimpomaa Sarpong-Kumankumah, Chairperson, CPP, handed over a renewed membership card to Captain Smart and welcomed him back into the Party.

She described Captain Smart as a “special son” of the Party, and rallied all members who had broken away to return and help rebuild the CPP to become a formidable force.

Nana Sarpong-Kumankumah said the CPP was poised to wrestle power in 2024 and called on the youth to join the Party to build a government that would deliver prosperity for all irrespective of their background and status in society.

“All the youth who are frustrated with the New Patriotic Party and the National Democratic Congress and are looking for alternative should join the CPP. We have more than 800,000 polling station positions opened,” she said.

Captain Smart, who appeared elated at the ceremony, thanked the leadership of the Party for what he described as “impressive” demonstration of love extended to him.

He rallied the rank and file of the CPP to come together and “prepare the CPP for battle”.

Captain Smart said the CPP had a track record of bringing real development to the people, saying: “When it comes to developing this country, no political party in this country knows it better than the CPP.

“If we want to save this country, first of all, let’s save the Party. Let’s change our approach and strategy and be proud that we are members of this Party,” he said.