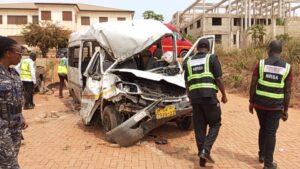 Mr David Osafo Adonteng, the Acting Director-General of the National Road Safety Authority (NRSA), has hinted of moves to reconsider the use of Sprinter and some other minibuses for carrying passengers if the scourge of road crashes they are involved in persists.

He said the spate of avoidable road crashes involving such vehicles due to the blatant disregard for road traffic regulations by some of the drivers, particularly along the Takoradi-Cape Coast-Mankessim-Accra highway, were terrifying.

The drivers often competed for passengers along that stretch racing at top speed in the process, risking the lives of passengers and other road users.

Mr Adonteng, in an interview with the Ghana News Agency at the weekend, commiserated with victims of road crashes and their families and expressed the Authority’s determination to curtail the menace.

He expressed sadness over the death of seven passengers in a gory accident on Thursday night at Gomoa-Antseadze near Apam in the Gomoa West District of the Central Region, after visiting those on admission at the Winneba Trauma and Specialist Hospital.

He was accompanied by Madam Pearl Adosu, the Head of Public Relations at the Authority, Ms Linda Affotey Annang, Central Regional Head of the NRSA, and Assistant Superintendent of Police, Beatrice Smith-Koree, the Director of Mankessim Motor Traffic and Transport Division.

Fourteen people were involved in the accident of which seven died on the spot whilst the other seven, including an infant, sustained injuries.

The accident involved two Sprinter minibuses heading to Accra from Takoradi and Mankessim. On reaching Gomoa-Antseadze, the one from Takoradi, on top speed, tried to overtake the other bus, veered off the road and catapulted into the bush leaving many trapped.

“We know how they behave on the road, we have alerted them, given them notices and warned them, but if they continue to misbehave and take people’s lives for granted, then we would be left with no option than to invoke our mandate by the law” Mr Adonteng said.

“We are backed by the Road Safety Act, (Act 933) and Legislative Instrument (LI) to take firm action. We have the modalities, and I’m sure when we go back to Accra, we would be taking policy decisions for the Ministry of Transport to consider in the coming days.”

Drivers must check the condition of their vehicles before putting them on the road, and endeavour not to drink and drive, he added.

Mr Adonteng interacted with some relatives of the deceased at the Mankessim Police Station and Mercy Women’s Hospital, as well as the Winneba Trauma and Specialist Hospital.

He interacted with the family of Ato Kwamena, a 34-year-old DJ, who boarded the vehicle from Ayensudo, near Elmina to Gomoa-Antseadze, but died in the accident right at his destination.

He also commiserated with relatives of Mr Solomon Agyare,  25, a driver’s mate in the Sprinter bus, who was married with a child.

Agyare, a commercial driver, join the Sprinter bus as mate to earn some income when his vehicle developed a fault. He hailed from Asante Akyem Amantia but lived at Kasoa.

Three remanded for robbing “Afrochella” fan of her iPhone X