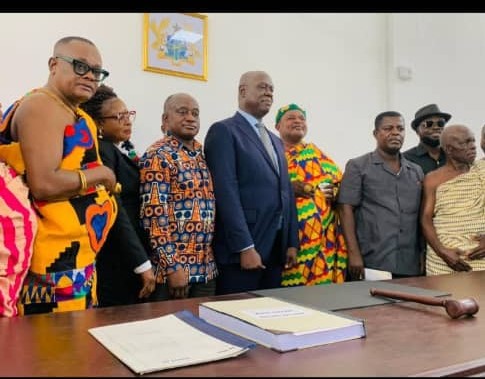 Easy access to quality justice delivery, at all levels, is the top priority of the judicial system, Mr Justice Anin Yeboah, the Chief Justice, has stated.

He said the ongoing inauguration of court houses in the various parts of Ghana was to expand and bring justice delivery to the doorsteps of the people, thereby reducing the cost and risks of travelling long distances to seek justice.

Justice Yeboah said this at the inauguration of a district court at Bonwire in the Ejisu Municipality of the Ashanti Region.

The inauguration of the court was a dream come true for the people of Bonwire, known to be the originators of the prestigious Kente cloth, which is the leading traditional fabric of the Ghanaian society.

He commended the chiefs and people for their unflinching support, which had ensured the successful completion of the project to ease the stress associated with travelling long distances to seek justice.

Mr Simon Osei Mensah, the Ashanti Regional Minister, lauded the Judicial Service for efforts to expand court infrastructure to bring its services to the doorsteps of the people.

He said the Government was committed to promoting the rule of law, justice and freedom for all people to go about their daily activities without let or hindrance.

Mr Osei Mensah commended the chiefs and people of Bonwire and the Ejisu Municipal Assembly for working hard to complete the project.

Nana Bobie Ansah, the Chief of Bonwire, called on the Government to help complete the ongoing road network in the area of which work had stalled for some time now.

He said Bonwire, as a historical and prominent town, needed a facelift to befit its status as the designer of the most intriguing and beautiful kente fabric not only for Ghana but the world over.