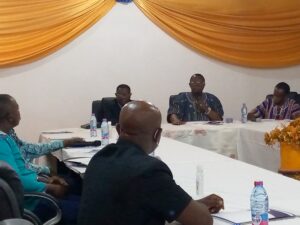 Founders and Chancellors of private universities in the country have met to form an association to champion their cause and growth.

The meeting brought together ten private universities owners and chancellors, who pledged their commitment to form the Association.

The team, however, was set to adopt a name, logo and constitution in two weeks as they reconvene on January 27, 2023 to agree on foundational issues, including maiden elections of leaders.

Dr Paul Kofi Fynn, Chancellor of Wisconsin International University College Ghana, said they were bedeviled with a myriad of challenges, hence their resolve to form an association to tackle them.

He said the Association would offer them a united front to enable them to influence the formulation and implementation of government policies on tertiary education.

Dr Fynn said they were always left out in negotiations between their universities and government institutions, saying, the Association would enable them to also meet with Government and state actors of their sector.

He said their voice was not being heard in negotiations involving tertiary education in the country, hence they were always in the background.

Dr Fynn said the Vice Chancellors Association of universities, which always had the chance to meet decision makers, was only interested in negotiating on their conditions of service and not the needs of the universities.

This, he stressed, had brought to the fore the need for them to be united as university founders and fight for the needs of their institutions.