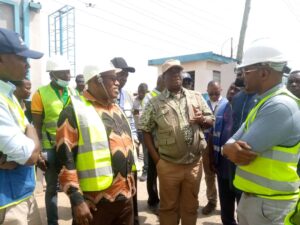 Mr Kwasi Amoako-Atta, Minister of Roads and Highways, says the 2.4- kilometer Ofankor Barrier to Pokuase road dualisation, will be completed in March this year.

After an inspection tour, he said he was impressed with the rate of work, the organisation and safety precautionary measures taken.

That portion of the Accra to Nsawam road is part of the Rehabilitation of the Ofankor-Nsawam Road Project, a 33.4 kilometer road to be dualized.

Mr Amoako-Atta had toured the project site in the company of some road engineers and directors at the Ministry as part a visit to some major projects in Accra.

The Minister, who had earlier inspected the project last year November, said: “Government attaches so much importance to this project as it has overarching benefits and it is part of the entire Accra-Kumasi dualization.”

In an interview with the Ghana News Agency, he said he was convinced per the progress he saw and the assurances he had that the March deadline given was feasible.

“I want to urge the contractor, Maripoma Enterprises Ltd, to keep on with such good works and Government is solidly behind the company and all other companies.” Mr Amoako-Atta said.

He urged his directors, contractors and other agencies to liaise and work together without fear or favour to compensate those affected.

Mr Thomas David Arthur, Resident Engineer, said the Contractor had been working day and night to ensure the completion of the 2.4 km stretch with a railway bridge.

“So overall, the work done is about 30 per cent and we are far ahead of schedule. We are working day and night and by that approach we would finish ahead of time,” he told the Ghana News Agency.

The Rehabilitation of the Ofankor-Nsawam Road Project started in September 2022, and it is scheduled to be completed in 24 months.

The Minister also inspected works on a flyover over the Motorway from Flowerpot Side View and the interchange at Junction Mall, Nungua, part of the La Beach Road Completion Project.