Four arrested for possessing over 104 bags of narcotic substances 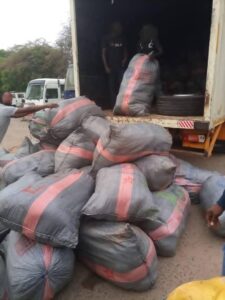 The police, on January 5, 2023, arrested four suspects for the unlawful possession of over 104 bags of substances suspected to be narcotics at Lolonya near Sege in the Greater Accra Region.

The four suspects – Ntow Prince, Felix Owusu, Jerry Quartey and Daitey Mashack- were arrested while discharging sacks of the compressed plant materials into a boat at the seaside at Sege.

A news brief from the police said during the arrest, suspect Daitey Mashack, who was the Assemblyman of the area, allegedly attempted to bribe the arresting officers with GH¢20,000.00.

It said the loaded truck with the substances had been impounded at the Tema Regional Police Headquarters together with the attempted bribe money.

The brief said the four suspects were subsequently put before the Ashaiman Circuit Court on Friday, January 6, 2023, where they had been remanded in police custody to re-appear on January 23, 2023.

It commended the Police team for the dedication and commitment to the service of Ghana.