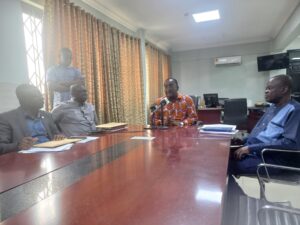 ‘‘I have database of most of the inner valleys sites in five regions that we visited that can be put to productive use. Some of them have farmers already cultivating but if we able to have a lot of interventions, we can do three crop seasons,” he said.

Mr Oppong-Boateng said this at a press conference to introduce himself to the Minister for Food and Agriculture.

GIDA is a body under the Ministry of Food and Agriculture responsible for the development of irrigation for agriculture production in Ghana.

Its functions include providing public irrigation facilities, technical and managerial services for the development and effective use of the facilities.

The Acting CEO said: ‘‘I have compiled a list of existing irrigation schemes nationwide with some in deplorable states that need to be revamped.’’

The Authority, he said, would visit the sites, appraise and expand those that needed expansion.

Mr Oppong-Boateng said Ghana had the potential to develop about 1.9 million hectares of land but for the past 50 years, it had done only 10 per cent, which was about 220,000 hectares.

‘‘Even out of that, about 80 per cent is by commercial farming. So, if you put all that we have done together, you cannot even reach smallholder farming capacity,’’ he stated.

The CEO said Jospong Group of Companies had expressed interest in revamping and managing the Ashaiman Research Centre.

‘‘We believe that irrigation should not be solely financed by Government we should have the private sector also supporting so we would work hand in hand with them,’’ Mr Oppong-Boateng said.

Dr Owusu Afriyie Akoto, the Minister for Food and Agriculture, tasked the CEO to ensure that all small dams, which were almost out of order as a result of lack of maintenance were operational, particularly, in view of recent talks about rice production in the valleys in the forest regions.