ECG removes service cables of 24 customers in Krobo over illegality 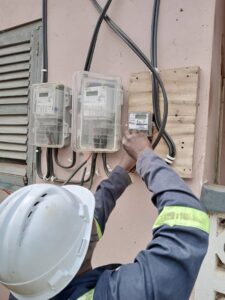 The Tema Regional Office of the Electricity Company of Ghana (ECG) has disconnected and removed service cables of 24 customers in its Krobo District following their involvement in some illegal connections.

Ms Sakyiwaa Mensah, Tema ECG Regional Public Relations Officer, revealed this to the Ghana News Agency in an interview in Tema after the first day of a meter monitoring exercise in parts of Krobo embarked upon by the Company.

Ms Mensah said the areas monitored on the first day were Sawer, Atua, Koletsum and Ablotsi.

She said 20 fake meters were discovered, which have been confiscated by the ECG, adding that, two illegally transferred meters were also detected during the exercise.

She said three-meter bypasses were also discovered adding, however, that the culprits were not available at the time of the exercise and have therefore been asked to report themselves to the Police.

“One woman in a residential property, was arrested by the Police for removing her newly installed prepaid meter and replacing it with an illegal postpaid meter,” she said.

Ms Mensah said the monitoring was conducted by two teams within the communities where they had installed prepaid meters based on indications picked by the ECG of some illegal meters being used in place of the ECG’s approved meters.

She added that the objective of the monitoring was also to check whether the meters were working as expected and to clean up fake or illegal meters.

This, she said formed part of ECG’s normal and standard operating policies which were conducted intermittently across all operational areas.