Do not reshuffle Fisheries Minister – Fishers in Western Region plead 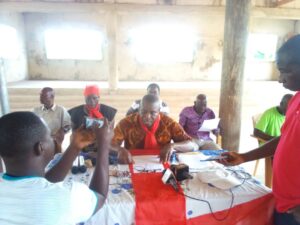 Fishermen and stakeholders within the fisheries value chain in the Western Region have appealed to President Nana Addo Dankwa Akufo Addo to maintain the Minister for Fisheries and Aquaculture Development, Madam Mavis Hawa Koomson in case of any ministerial reshuffle.

According to them, the Minister had acted appropriately on most occasions and taken the right approach to the challenges in the fisheries sector.

Speaking at a News conference in Axim, the Western Regional Secretary of the Ghana National Canoe Fishermen Council (GNCFC), Mr. Mike Abakah-Edu said Madam Koomson was on the right path to addressing the most pressing issues in the fisheries sector with her openness and transparency leadership style.

“We the fishing fraternity in the Western Region and beyond have complete confidence in the Fisheries Minister because we have seen her total devotion to duty and her demonstration of having absolute control over thorny challenges and pressing issues confronting the fishing industry”, he added.

Mr Abakah-Edu added that the Minister consulted the leadership of various fishing associations to discuss challenges and sought their recommendations where necessary.

“We can confidently say for a fact that she is one of the best Ministers the sector has ever seen for the past 15 to 20 years” with a lot of interventions and stringent measures, adherence to Fisheries Act 625 of 2002 and Regulation 1968 of 2010 resulting in consistent harvesting of fish during post closed season fishing expedition”, he stressed.

According to him, the minister had continued to lay a solid foundation for the recovery of Ghana’s collapsing fish stocks and made special reference to the good results of the 2022 closed season, which the sector minister was co-opted as one of the co-management tools to help the recovery of the depleted fish resources.

“Madam Hawa Koomson has been able to solve the unacceptable blame game among the fisheries industry players and brought them together, thereby earning the accolade, “OBAATANPA Sector Minister”, he said.

“Though the President reserves the exclusive right to reshuffle, we want to plead with him to skip Madam Hawa Koomson since she has an “unfinished business”, which is crucial and critical to the very survival of our artisanal fisheries, which is the heartbeat of coastal dwellers”, he stated.

The fisherfolks greatly commended the introduction of Canoe Identification Card automation machines which the Ministry procured to curb the anomalies in the distribution and sale of premix fuel.

Also, they said the celebration of the 2022 fish festival and the hosting of FAO-OACPS and IYAFA among others had provided a lot of visibility and goodwill for improvement in Ghana’s Fisheries- sector.

They also mentioned that the Fisheries Minister successfully stopped the destructive SAIKO, the illegal fishing transshipment which existed for many years, and made the concern of artisanal fisheries her priority.