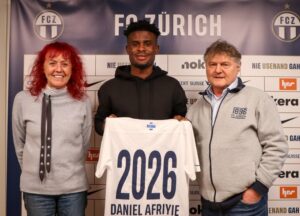 Afriyie Barnieh was unveiled by the Swiss Club on Tuesday, January 2023 after he completed the deal which ends in the summer of 2026.

The 21-year-old joined the Swiss side from Premier League giants Hearts of Oak SC.

He joined the Ghanaian giants in 2020 and was influential in Hearts of Oak’s team that won the 2020-2021 Ghana Premier League and MTN FA Cup back-to-back.

The promising player was part of Coach Otto Addo’s squad for the 2022 FIFA World Cup in Doha, Qatar.

On his signing, he said: “I am here to help FC Zurich progress, can’t wait”.