Passengers lament over refusal by tricycle drivers to reduce fares 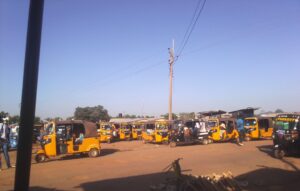 Passengers at the Bolgatanga township of the Upper East Region have expressed worry over the failure by tricycle drivers to reduce transport fares despite the reduction of fuel prices.

The drivers have also failed to comply with the directive despite the reduction of the fuel prices at the pumps and the joint directive by the Ghana Road Transport Coordinating Council (GRTCC) and Ghana Private Road Transport Union for transport operators to reduce fares by 15.3 per cent.

According to the passengers, the tricycles drivers were taking undue advantage over them because their refusal to comply with the directive by the GRTCC and the GPRTU to the same as the Trotro and Taxi drivers.

The passengers said the tricycle, popularly known as “Mahama Can Do” had become the most available means of transport for inner community movement because of its convenience and ability to enter narrow places.

Mr James Kolog, a retired teacher bemoaned the fares charged by the tricycle drivers and called on the GRTCC and GPRTU to call them to order

‘’I came from Pelungu and we used to pay GH₵12 but it went to GH₵15 when prices of petrol increased from GH₵15 per liter to around GH₵18 per litre, and that was quite understandable. But now, fuel prices have come down and all things being equal, fares must also be reduced but that is not the case,” he stated.

‘’This is lawlessness, directives will be given by authorities in which you are under, and you won’t comply. You see, they have taken over the business of taxis and Trotro drivers and are now misbehaving because unless in far places like Bawku or Navrongo no one patronizes taxis again here,” he added.

Mrs Mercy Ayinga, a trader told the Ghana News Agency (GNA) that, the fares charged by the tricycle drivers had a ripple effect on her business

‘’When fuel prices reduced, it was expected that things will be much better because prices of goods would ordinary reduced as well, but that has since not reflected because of some of these internal forces, imaging me still paying GH₵5 as fare to just Zuarungu and still paying at same price for my goods’’ she sated

‘’Tricycle drivers must be made to reduce their fares because it is affecting our businesses. Our colleague traders with their own means of transport can reduce prices of goods because they only consider fuel prices, but we are left stranded because we are not benefiting from the fuel price reduction,’’ she added.

Mr Ayinga Stephen, a tricycle driver, said the absence of a proper union or an association mobilising them had contributed largely to their inability to comply.

‘’I personally agree with the passengers, and I think  is unfair on our part because when the rise in fuel prices was affecting us, we quickly increased fares and now that it has reduced to our benefit no one is talking to us about reducing even though our passengers are complaining every day; and it is because we do not have a proper association like the trotro drivers,’’ he said.

A joint statement by GRTCC and GPRTU for transport operators to reduce fares by 15.3 per cent took effect on December 19, 2022 and has since been complied by Shared Taxies, Intra-City (Trotro) Intercity (Long Distance) operators except tricycle operators in the Region.