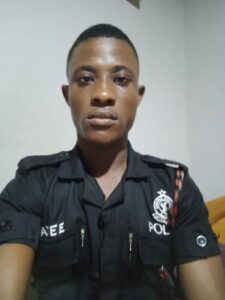 Isaac Osei, 28, has been arrested by the Motor Traffic and Transport Department (MTTD) of the Awutu Bereku Police Command for posing as a police officer.

He was arrested on Tuesday, December 20 during routine checks by the police on the Accra Winneba Highway, heading towards Winneba from Kasoa in a Kia Saloon vehicle.

Police sources said Osei claimed he was a police officer but when he was asked to provide his documents, he could not do so.

The police officers on duty became suspicious and requested he stepped down from the vehicle and when his uniform was inspected, it was detected it bore the name ‘Laryea’.

The suspect immediately removed some SIM cards from his phone and chewed them before the police could begin interrogation.

He later confessed he was not an officer and that the uniform belonged to a friend who is a police officer.

He is currently assisting the police in its investigations at the Awutu Bereku police station.

Assembly members angry over continual absence of MPs to meetings