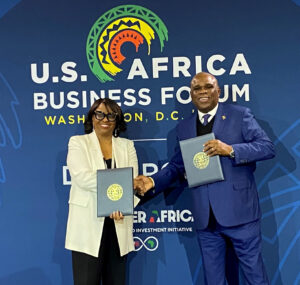 The Afreximbank and the US EXIM have signed and MoU for $500 million to support trade between Africa and the US.

Afreximbank has said in press release copied to Ghana Business News that the  MoU is to enhance trade between Africa and the United States of America as well as expand commercial engagements of the African Diaspora community in the US towards facilitating transactions critical to the economic growth of both the US and Africa.

The release notes that the two banks will support trade and economic integration in Africa and across a broad range of trade-enabling sectors, including helping to revive and strengthen the African aviation sector.

“Both parties will also facilitate trade and investments in healthcare, power, digitization, Agriculture, and Agro-processing, and transportation infrastructure, including rail and road projects, as well as investments in renewable energy projects, most importantly, scaling support for industrial development across the African continent,” it said.

It indicates that Afreximbank and US EXIM will also cooperate with other US departments and agencies through the Prosper Africa initiative, a US Trade and Investment Initiative which aims to increase trade and investment between the US and African countries. The Prosper Africa initiative also targets other organizations, businesses, and investors from the African Diaspora community in the US.

The MoU was signed by Professor Benedict Oramah, President and Chairman of the Board of Directors of Afreximbank, and Reta Jo Lewis, Esq., President, and Chair of US EXIM, on the sidelines of the U.S.-Africa Leaders Summit, in Washington DC.

FDA disposes of unwholesome products, worth GH₵250,000 in Central Region