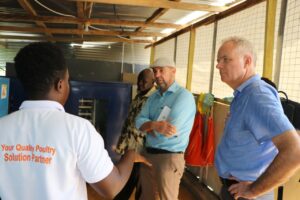 The Netherlands Development Organization (SNV) has called for effective joint actions by all organisations working on climate mitigation and adaptation issues to help create resilient economies and communities at both local and national levels.

“It is important that we do not compete as NGOs but try to fit into a joint agenda and work from bottom up, which means focusing on the people that are being hit the hardest, will help make progress,” Mr Andre de Jager, Managing Director of the Agri-Food, Energy and Water Sectors of SNV, told the Ghana News Agency in Kumasi.

Interacting with the GNA after a two-day working visit to the Ashanti region, he said issues on climate change was a call to action by all and there was no need for organizations working on mitigation and adaptation efforts to wait for policy makers to take actions.

The visit was for him to engage with green entrepreneurs and sustainable job creators, who were participating in the SNV’s European Union funded GrEEn project and the Dutch Ministry of Foreign Affairs sponsored 2SCALE project in Ghana.

According to Mr Jager, the SNV together with over 15 international partners in the food space, hosted the first ever Food Systems Pavilion at the just ended COP 27 held in Egypt, to help accelerate actions on food for people and planet project.

He said the priority initiative was meant to address the issue of agriculture and food systems, which are responsible for one-third of global greenhouse gas emissions.

“As an implementing organization that focuses on food systems, together with consumers, action groups, national non-governmental organizations (NGOs) and other private sectors actors, we do not have to wait for COP 28 or COP 29 to join efforts towards climate adaptation and mitigation,” he stated.

He said in as much as SNV was influencing policies at the global and national levels, it was also prioritizing the needs of people and their access to basic services by guiding donors on projects that had the most impact.

It was among these reasons, he noted, that SNV’s new strategic framework, was focusing on agri-food, clean sustainable energy and water, with an overall goal of implementing projects to attain systems transformation, address inequality and promote sustainability.

The strategic framework would from now till 2030, focus on climate adaptation and climate mitigation, address gender equality and social inclusion governance and strengthening of institutions.

Mr. Jager explained that SNV was transitioning from agriculture to agri-food with an emphasis on the environment in which food was produced, processed, brought to consumers, as well as the quality of food and nutrition.

He added that SNV’s previous concentration on Water, Sanitation and Hygiene (WASH) was also moving to water, as it recognized water not only as an important aspect for sanitation but also for agri-food systems.

“We have water stress in many of the countries, either there’s a drought, the shortage of water or we have floods and an excess of water.

Most of these crises are induced by climate change.

Among the businesses he visited were the Women’s Haven Africa, one of the GrEEn project’s business hub partners providing six-month business advisory services training, and also engage with entrepreneurs, who have completed the GrEEn Incubation Programme training.

Mr Jager also interacted with businesses such as Mushfam Limited, Supreme Pod Industries, Fiscanods Enterprise and others, to know how matching grants from GrEEn Project had scaled up and sustained their businesses.

At Eazz Foods in Fumesua in the Ejisu Municipality, the company is helping to solve post-harvest losses in the poultry industry by converting raw eggs into powder.

The firm, with the support from the maiden GrEEn Innovation Challenge, has purchased new equipment which was helping to improve productivity and the quality of its products.

Mr Jager again interacted with the management of the Kwadaso Agricultural College, which was implementing the SNV GrEEn Project skills development partnership through the provision of a General Agriculture Certification Short Course to youth interested and practicing agriculture.

The SNV team further visited the Rockland Meat Ghana, at Agona in the Sekyere South District, where a poultry value chain business operator integrates smallholder farmers as producers of broilers and maize out-growers.

Mr. Anjo Van Toorn, Country Director of SNV Ghana, indicated that it was time organizations built on projects implemented in the past and focus on strengthening the systems approach; looking at the enabling environment and barriers in the environment that could be minimized or eliminated.

Stigmatisation towards returned migrants should be discouraged

International conventions on fisheries must be identified as state laws