Ministry of Foreign Affairs to commence redevelopment of AICC in 2023 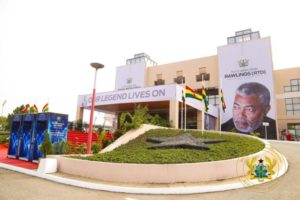 The Ministry of Foreign Affairs and Regional Integration plans to commence redevelopment of the Accra International Conference Centre (AICC) in 2023, Mr Bryan Acheampong, the Chairman for the Parliamentary Select Committee on Foreign Affairs, said on Wednesday.

He noted that negotiations were far advanced and the ministries of Foreign Affairs and Finance, together with Price Waterhouse Coopers, are in the process of conducting a value for money audit.

Mr Acheampong made this known on the floor of Parliament during the debate on the Committee’s report on the 2023 Budget Estimates of the Ministry of Foreign Affairs and Regional Integration.

At the end of the debate, the House approved GHS816.75 million for the implementation of the programmes and activities of the Ministry for the 2023 financial year.

Madam Shirley Ayorkor Botchwey, the sector Minister, moved the Motion for the approval of the budget.

In 2019, the Ministry engaged Cornerstone Engineering Company as transaction advisor to the project and the Architectural and Engineering Services Limited (AESL) provided the initial structural integrity report.

Mr Acheampong said the Committee was informed that funding for the reconstruction of the AICC was being arranged by Summa Turizm Yatirimciligi A.S. a Turkish Consortium, in collaboration with Standard Chartered Bank and MUFG Bank of Tokyo, Japan under a public private partnership (PPP).

The contract sum was €116 million, and the contract was yet to be signed, he said.

The Committee expressed concern over the financial viability of the project, since, over the years, the Ministry had raised concerns over non-payment for the facility’s use by some metropolitan, municipal and district assemblies and other government agencies.

It also demanded of the Ministry to show evidence of retrieving monies owed as per its previous years’ recommendation, Mr Acheampong said.

It also requested for the engineering report on the AICC to assure itself of the claims being made concerning the structural defect but the Ministry could not provide it, Mr Acheampong said.

“Some members of the Committee expressed their inability to support the reconstruction of the AICC because of the distressed nature of the current economy,” he stated.

“According to them, the Minister of Finance, during the budget presentation for the 2023 fiscal year, indicated that non-essential projects should be shelved until the economy recovers.”

“They again argued that the reconstruction of the AICC has not been captured in the list of essential projects of the Ministry of Finance for the year 2023.”

Mr Acheampong said the Committee recommended that the Ministry endeavoured to produce the report on the feasibility studies and the structural integrity on the AICC to inform future decisions on the project.