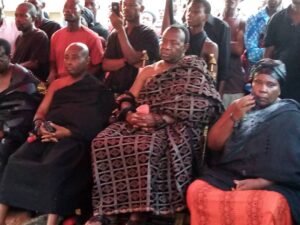 According to Odomfour Dr. Apraku III, the rippling effects of illegal mining (galamsey) on the country was enormous, hence the need for collective approach to tackle the menace more proactively.

“This war is necessary to save the nation’s water bodies and preserve our forest resources for the benefit of not only today’s generation but the generation yet unborn”, he stated.

Odomfour Dr. Apraku III made the declaration when he was addressing a colourful durbar of the chiefs and people of the area to climax the enstoolment of a new Paramount Queen-Mother and six other sub-chiefs at Odomase Number One in the Bono Region.

Consequently, he warned particularly, his sub-chiefs against conniving and supporting illegal mining activities for monetary gains, saying any chief who would engage in such practice would not be spared.

Madam Yaa Pokua, a-50-year-old Sunyani-based businessperson is the new Paramount Queen Mother with the stool name Nana Yaa Adanse Poduo II and she ascended the stool that became vacant following the sudden death of the former occupant, the late Nana Abenaa Boatemaa in 2021.

Odomfour Dr. Apraku III said if illegal mining activities were not brought under control, the nation could import potable water due to the extensive destruction of rivers and other water bodies by illegal miners.

“We are also not going to tolerate the activities of the nomadic Fulani herdsmen who use their animals to destroy people’s farms and properties.”

“In fact, we will have no other option than to shoot and kill these animals if the nomads failed to take their cattle away. My people are mostly farmers who depended on farming activities for their survival, and we cannot sit unconcerned for these Fulani people to destroy their source of livelihoods”, Odomfour Dr. Apraku III stated.

Ghanaians urged to go for COVID-19 booster to protect themselves