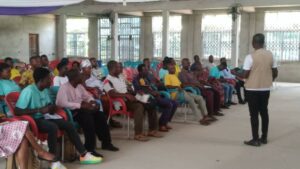 Mr. Kwame Osei, the Country Director of Rainforest Alliance, has said there are still abuses in the production of cocoa and gold despite years of efforts to address them.

He said consolidated gains in child labour over the last two decades had been hit by a downturn of events with alarming figures indicating there was an increase of 8.4 million in just over four years as published by the United Nations Children’s Fund (UNICEF) and the International Labour Organisation (ILO).

Speaking at a stakeholders’ dialogue at Nyinahin in the Ashanti Region, Mr Osei disclosed that due to the impact of COVID-19, that closed schools around the globe, an additional nine million children were at risk of child labour.

He however said not all child work on farms were harmful, adding that, age-appropriate tasks during out-of-school hours could be a great way for children to learn important skills.

“The line is crossed, however, when children perform hazardous work likely to harm their health or limit their education,” he pointed out.

He said the elimination of harmful forms of child labour was critical to ensuring the human rights and welfare of people living and working in Ghana’s cocoa growing and mining communities and that Rainforest Alliance had several pathways of tackling child labour such as raising community awareness of the impact of the menace and supporting small-scale farmers through certification.

Mrs. Joyce Opoku-Marboah, Senior Project Manager of Rainforest Alliance, said both producing and consuming countries of cocoa and gold had raised concerns about the menace and were working towards preventing, identifying and eliminating child labour in cocoa, gold mining and other sectors.

She said in the past four months, community representatives in 20 communities across four districts observed interventions being implemented by government and companies to identify, prevent, track and eliminate child and forced labour in cocoa and mining.

“Based on their observations, these community groups intend to present their concerns, issues and demand actions and commitment from government and companies set out to implement actions on child labour in their communities,” she explained.
She said the district dialogue was premised on grounds that child labour was a shared responsibility that required the involvement of all stakeholders to eliminate the practice from the sector.

Madam Aba Oppong and Mr. Yoda Haruna of the Rights and Responsibilities Initiatives of Ghana (RRIG) and Center for Community Livelihood Development, the two CBOs working in the district led the discussions.

Rainforest Alliance an international non-government organisation (NGO) in nature preservation, is leading a consortium of three NGOs to tackle child and forced labour in four districts in Ghana.

The organisation is implementing a project dubbed “Tackling Forced and Child Labour in Ghanaian Cocoa and Gold Mining” together with International Cocoa Initiative and Solidaridad West Africa, with funding from the Norwegian government.

The Norwegian government is supporting the consortium to implement the project in 40 communities in four districts – Atwima Mponua, Amenfi West, Atiwa East and Bibiani-Anhwiaso-Bekwai in the Ashanti, Western, Western North and Eastern Regions respectively.

The project, named “Ye Ne Mmofra No Nti”, is to build the socio-economic-resilience of vulnerable people in cocoa and gold-mining communities in Ghana and protect them against forced labour and worst form of child labour.

The project targets government, cocoa companies and the vulnerable people in the communities to demystify the complex problem that is caused by a complex interplay of social, economic, legal and cultural factors that span across the individual household, community, national and international levels.

The government and cocoa companies have made commitments towards the eradication of child and forced labour in the various supply chains to deepen the commitments and have communities involved in the process and interventions being carried out in the communities.

This has been ongoing with the engagement of Community Based Organizations mandated to work with selected observers, resident in each of the project communities to engage stakeholders at the community and district level.

In the last three months, the observers consistently observed and sometimes, followed-up on the implementation of the commitments by government and cocoa companies in their various communities.

This observation resulted in the holding of joint quarterly meeting of representatives of the communities, government, and cocoa companies/mining associations on the beneficiary districts.

Expansion drive by Ghana army said to be timely

Saving to save lives: How ‘susu’ empowered a woman to flee from violence