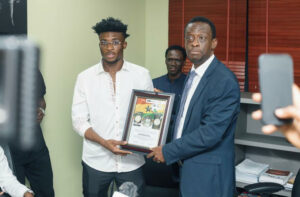 The presentation was done on behalf of Ghana Gold Expo, a leading advocate for promoting responsible mining in Ghana to appreciate the efforts of the Ajax youngster who raised the flag of Ghana high, scoring two goals in all three games played.

Mohammed Kudus rose-up to the task in Ghana’s first Group stage game after he managed to provide an assist in his sides 3-2 defeat to Portugal, having kept the defense of the Portuguese on their toes.

The 22-year-old was again unstoppable in the second Group stage game against South Korea as he bagged a brace to help Ghana record its first win in this years World Cup.

The promising talent after Ghana’s exit in this year’s World Cup, had received lots of interest from some top European sides following his rise in form this season.

The Ajax man is currently in Ghana as he would be heading to his club side to join his teammates in some few days.