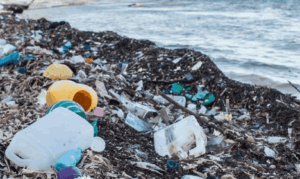 Nine per cent of the 0.84 million metric tonnes of plastic waste generated in Ghana annually, leak into the ocean, Dr. Kwaku Afriyie, Minister of Environment, Science, Technology and Innovation (MESTI), has revealed.

He said the plastic waste recovery rate for flexibles (pure water waste) was 73 per cent, while that of the high density polyethylene (rigid/furniture) was 79 per cent, and polyethylene terephthalate (PET) was 10.3 per cent.

Additionally, the plastic waste recovery for shopping bags and low micron bags were 0.00 per cent and 0.001 per cent, respectively, he said, citing statistics from the Ghana Plastics Manufacturers’ Association.

Dr. Afriyie made this known in a speech read on his behalf, in Accra, at the inception workshop of the Global Environment Facility (GEF)-funded Project dubbed, ‘Establishing a Circular Economy Framework for the Plastics Sector in Ghana.’

According to the Minister, applying the principles and practices of circularity throughout the full life cycle of the plastics value chain represented the safest way to manage the plastic menace.

This is in respect of its design and production, through its consumption, disposal and to its processing into secondary materials for circular production.

The GEF-funded project has the objective of strengthening the national capacity of Ghana to transition to a circular economy within a framework that addresses plastic leakage into the country’s oceans and waterways.

Dr. Afriyie said the Ministry was working in partnership with stakeholders to advance the NPAP National Action Roadmap – a locally-designed ambitious plan that provided a clear set of actions for Ghana to achieve zero plastic leakage into oceans and waterways by 2040.

The intention was to brainstorm and apply technology to address plastic pollution, waste management and efficient resource utilisation.

Mr. Oliver Boachie, Special Advisor to the Ministry, giving a presentation of the draft annual work plan and budget for 2023 in respect of the Project, said some of the expected outcomes of the initiative were to avoid the emission of persistent organic pollutants and create 746 direct jobs and 9, 864 indirect jobs.