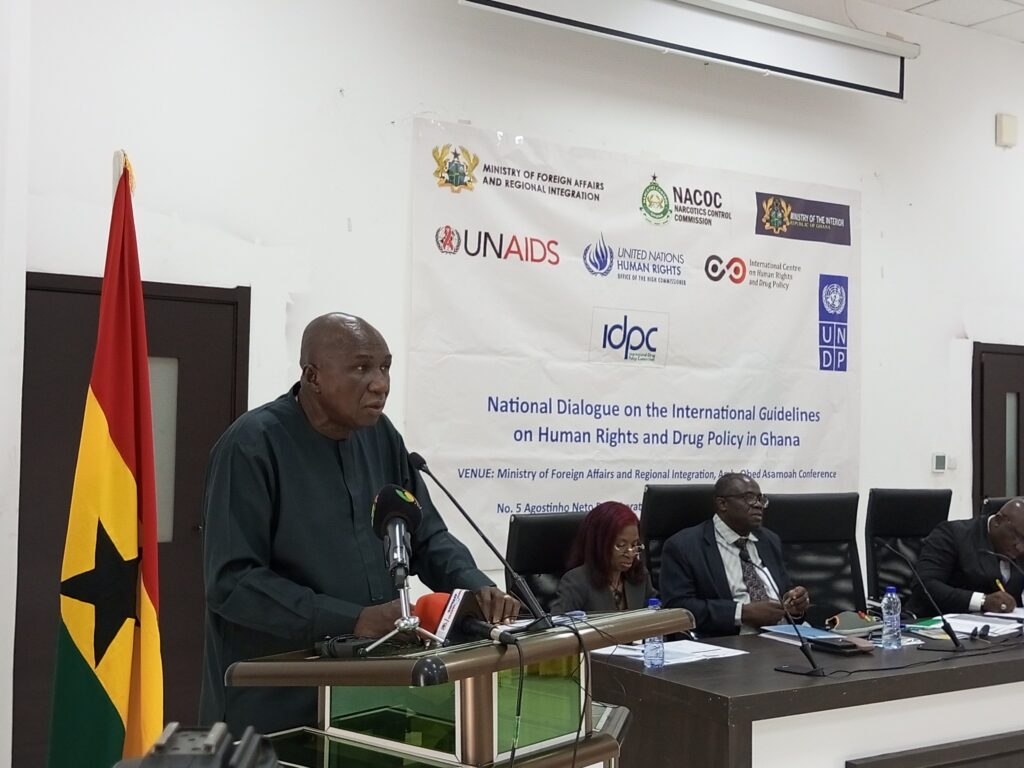 The Ghana government is committed to ensuring that drug laws and policies are consistent with Ghana’s obligations under international human rights treaties ratified, Mr Ambrose Dery, the Minister of the Interior, said on Monday.

“Accordingly, we must develop measures that would improve health, safety, security and the socioeconomic wellbeing of the people by reducing drug related harm, illicit trafficking and associated crime,” he said.

Mr Dery said this at the opening the National Dialogue on the International Guidelines on Humans Rights and Drug Policy in Ghana.

The workshop was to create a space for state representatives, civil society and other stakeholders, including relevant commissions and experts, to discuss drug policy-related issues from human rights perspectives and give recommendations for the way forward.

To empower mandated state institutions to perform effectively, the Narcotics Control Commission Act was passed by Parliament in 2020, primarily to transform the former Narcotics Control Board (NACOB) with an expanded mandate and law enforcement powers, he said.

Mr Dery said the new law was aimed at closing the gaps in interagency coordination and strengthening the government’s toolkit for combating drug-related harms in the country.

The Narcotics Control Commission Act 2020 (Act 1019) also sought to reduce the stringent mandatory five-year imprisonment for possession and personal use of illicit drugs to a lesser punishment.

The law focuses on establishing a more humane drug policy and pave the way for best practices in the management of narcotic drugs.

“One of the primary goals of Ghana’s new drug law is to treat drug use and addiction as a public health issue, thus converting prison terms for personal drug possession into non-custodial alternatives, including financial penalties,” he said.

“This is consistent with the current programmes and policies to decongest the prisons, particularly the Justice for All Programme, which was established in 2007.”

Mr Dery said Ghana was developing a National Drug Control Master Plan (NDCMP) expected to be completed between 2022 to 2026 to ensure the country’s drug policy was comprehensive, integrated and multidisciplinary.

Some key points in the Plan are that Ghana, like other West African countries, had historically taken a zero-tolerance punitive approach, with penal sentences considered as critical tools in reducing the scale of the drug market.

The Plan would provide an opportunity to reduce disproportionate sentencing for drug-related offences in Ghana and ensure better health outcomes.

Mr Charles Abani, the United Nations Resident Coordinator, Ghana, said the COVID-19 pandemic had brought to the global community the truth that health and human rights were interconnected, and that human rights-driven efforts were crucial if UN member states were to get on track to achieve the Sustainable Development Goals (SDGs).

He said the pandemic also had made the criticality of science and evidence more important than ever – indeed a principle and practice that should also be the basis for both global as well as national drug policies.

Mr Thomas Mbomba, a Deputy Minister of Foreign Affairs and Regional Integration, said it was important that Ghana’s drug laws reflected the right responses to her situation and ensured her people lived in good health, peace, prosperity, dignity and security.

He said the International Guidelines on Human Rights and Drug Policy called for governments to address the root causes for which people and communities cultivated illegal crops such as cannabis, and to guarantee the right to an adequate standard of living for those communities.

This meant that they should be provided with a viable and sustainable economic alternative, he said.