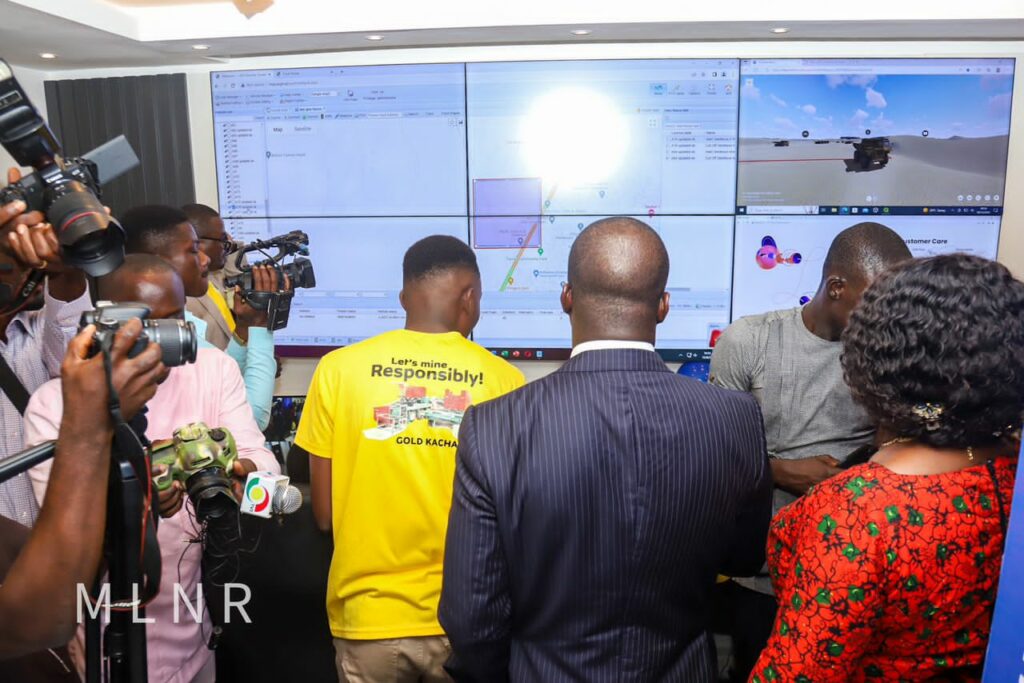 A Network Control Centre Situation Room for tracking earth-moving equipment and vehicles carrying explosives has been inaugurated by the Minister of Lands and Natural Resources, Samuel Abu Jinapor.

The Centre, which operates 24/7, is located at the headquarters of the Minerals Commission in Accra and would track and monitor excavators used by the mining companies on their concessions, vehicles carrying explosives and a call centre to receive complaints and concerns from stakeholders.

It was established by the Commission in collaboration with the University of Mines and Technology, (UMaT), Tarkwa, in compliance with the Legislative Instrument (L. I 2404 Minerals and Mining Operations-Tracking of Earth Moving Equipment) Regulations, 2020.

So far, the Centre is tracking 40 excavators and three explosive tracks on the field.

It is expected to work closely with the various District, Municipal and Metropolitan Assemblies, excavator dealers, Ministry of Transport and the Tema Port to capture all existing earth-moving equipment and new ones being brought into the country under its radar.

At the inauguration ceremony in Accra on Thursday, Mr Jinapor urged the management of the Centre to ensure that all earth-moving equipment operating across the country were brought under its radar for monitoring.

The establishment of the Centre, he said, formed part of the gamut of measures rolled out by the Government to ensure responsible and sustainable mining and regularise the small-scale mining sector.

He mentioned the reformation of the mining industry and the enforcement of the laws governing the sector as the key pillars to sanitise the industry.

Under the reformation of the mining industry, Mr Jinapor mentioned the licensing regime through an online platform, use of mercury-free machines and tightening of the laws to make it more punitive while the deployment of soldiers through the “Operation Halt” and river guards on some major rivers as part of the enforcement option.

The Minister lauded the management of Minerals Commission for the yeoman’s job done so far in ensuring proper regulation of the sector though there was more room for improvement.

Mrs Barbara Oteng Gyasi, the Board Chair, Minerals Commission, in her remarks, recounted some of the challenges the Commission faced during the year and cited the Appiatse explosion that claimed 14 lives.

She said it had learnt lessons from the explosion and would take proactive measures to forestall future occurrences.

Dr Sylvester Akpah, the Consultant for the Centre and Lecture at UMaT, took the Minister and his entourage round and explained is operations.

He said it took them three months to establish the centre comprising three sections- Monitoring of Earth-moving Equipment, Explosive Track Monitoring and a Call Centre.