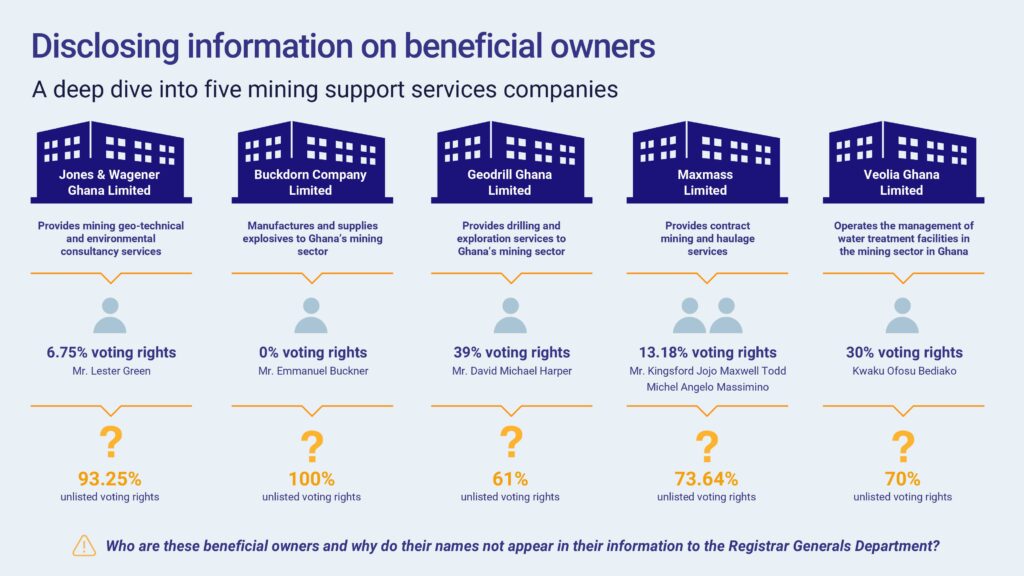 Some mining support services companies permitted by Ghana’s Minerals Commission to carry out operations in the extractive sector in Ghana are providing incomplete or false information to the Registrar of Companies at the Registrar General’s Department, in the ongoing registration of beneficial owners of companies required by the Companies Act 992.

The companies involved are Jones & Wagener Ghana Limited; a Class A mining support service company providing mining geo-technical and environmental consultancy services, Buckdorn Company Limited, manufacturers and suppliers of explosives for the mining industry, and Geodrill Ghana Limited, providers of drilling and exploration services. The rest are Maxmass Limited, providers of contract mining and haulage services and Veolia Ghana limited, a Class A company that is into the operatorship and management of water treatment facilities in the mining sector.

These companies are part of the only 43, that have provided details of their beneficial owners to the Registrar of Companies, as at September 11, 2022.

According to Act 992, a beneficial owner of a company is an individual;

Money laundering tax avoidance and evasion are serious crimes. These activities rip countries of the needed tax for development. In third world countries such as Ghana, the implications are even dire as the rich and people capable to pay taxes will avoid paying, whilst the poor is overly taxed, like the controversial e-levy. (Money laundering and tax evasion become even more pronounced, if they are done in the extractive sector, the sector with a lot of cash.)

According to the ECOWAS body that promotes policies to protect member States’ financial system against money laundering, terrorist financing and the financing of the proliferation of weapons, the Inter-Governmental Action Group against Money Laundering in West Africa (GIABA) which was established by the Economic Community of West African States (ECOWAS) Authority of Heads of State and Government in the year 2000, the extractive “sector is linked to illicit financial flows resulting from corruption, drug trafficking, arms smuggling, and other illegal methods of generating illicit funds”, and Ghana is no exception.

To avoid this conundrum, companies operating in the extractive industry in Ghana are required to disclose the “real” people behind those companies, as spelt out in Act 992 of 2019.

The Office of the Registrar of Companies is required by Act 992 to obtain, verify and record information about beneficial owners of companies in its database, including those in the mining sector. The Registrar General’s Department is to verify the information being provided.

“A company that provides false or misleading information to the Registrar commits an offense and is liable on summary conviction to a fine of not less than one hundred and fifty penalty units and not more than two hundred and fifty penalty units or to a term of imprisonment of not less than one year and not more than two years or to both”. 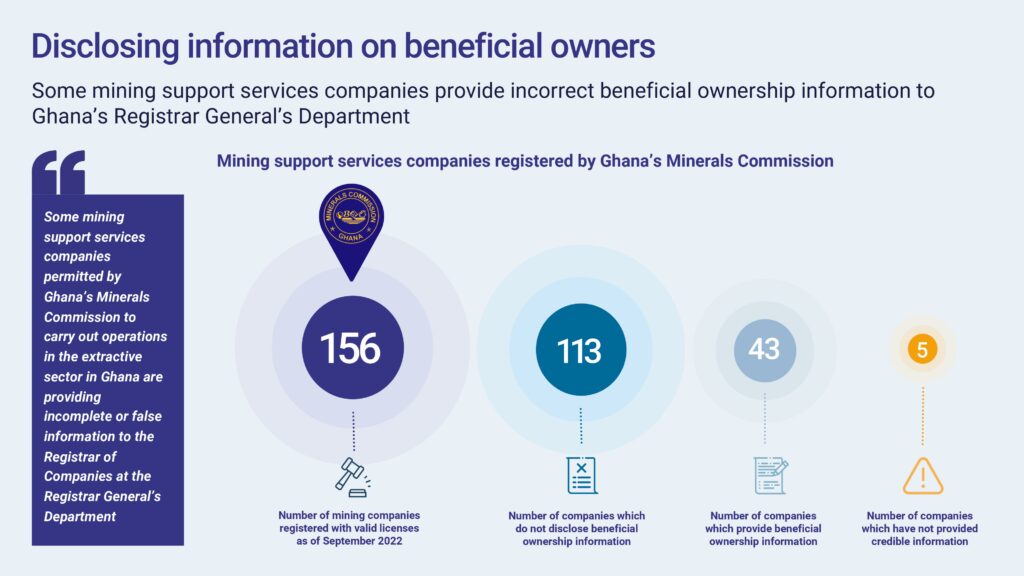 Jones & Wagener Ghana is a Class A mining support Service providing mining geo-technical and environmental consultancy services. This company has a valid permit with a license code of MC1917. It provided its beneficial ownership details to the Registrar Generals Department on March 28, 2022. The company said in its documents that a South African; Trevor Alan Lester Green, a geotechnical engineer living in South Africa is a beneficial owner of the company. However, Lester Green holds only 6.75 percent voting right when making decisions for the company. What this means is that there is (are) other persons holding the remaining 93.25 percent voting right in the company who were not listed.

Lester Green, according to the UK government’s database on companies (accessed here) who used to hold over 75 percent shares and control of Jones and Wagener International ceased to be a person with significant control when other persons were introduced as shareholders and directors of the company.

An email was sent to Lester Green on the address he provided to Ghana’s Registrar that anytime he is needed, he could be contacted on. The mail was sent on September 15, 2022. For 26 days, even though the mail went through, there was no reply. A phone call was placed to his south African telephone number on October 11, 2022 at 12:05, but the feedback from Vodacom mobile service said “the number is incorrect”, even though True Caller identified the number as registered to him.

The next company that came up with “incomplete” information is Veolia Ghana limited, a Class A company into the operatorship and management of water treatment facilities in the mining sector in Ghana.  The company lists Kwaku Ofosu Bediako, a Ghanaian business executive in Accra as the only beneficial owner. However, when it comes to voting on critical matters in the company, Bediako has 30 percent voting rights. The remaining person(s) who hold(s) the significant 70 percent are not disclosed.

A mail was sent to Bediako for an explanation on September 15, 2022. By September 29, there had been no reply to the message. A call was placed to the contact number provided to the Registrar General’s Department to be used to reach Bediako. The phone call was placed at 4:28pm but was answered by someone [a lawyer] who denied having any knowledge of a company called Veolia Ghana Limited, and that he cannot be a beneficial owner of same. His name, he said, is not Kwaku Ofosu Bediako. The contact number was checked, and rechecked to confirm if it was the number that was provided, after the fourth attempt, the response was same. The telephone number provided is not connected to the beneficial owner of Veolia. The email sent to the address provided is yet to receive a reply after over a month.

Third on the list is Geodrill Ghana Limited, providers of drilling and exploration services to Ghana’s mining sector. The company has on its records at the Registrar of companies that David Michael Harper, a Ghanaian is the sole beneficial owner with 39 per cent voting right. The person(s) holding the remaining 61 percent voting rights are not listed on the records of the Registrar General. In our attempt to seek clarity on the persons holding the remaining voting right, a mail was sent to Harper for an explanation on September 15, 2022.

The mail as at October 11 had not received any reply. A phone call was placed to his phone number provided, and the following ensued:

Journalist: I am following up on a story on beneficial ownership disclosure in Ghana

Call is ended. A second call was placed but a busy tone was the feedback. So as at the time this report was put together, no explanation was received on the mail sent or any other response from Harper.

The next mining support company checked is Buckdorn Company Limited, a Class A mining support company that manufactures and supplies explosives to Ghana’s mining sector. Buckdorn was incorporated on May 1 2018. It has a valid permit from Ghana’s Minerals Commission with a license code of MC2020. Its beneficial ownership details were provided to Ghana’s Registrar of Companies of the Registrar General’s Department on June 3, 2022. Buckdorn Company Limited lists Emmanuel Buckner, a Ghanaian with financial relationship with the company as its sole beneficial owner. What is curious is that, when it comes to voting right on decisions in the company, Buckner says he has zero percent. Persons holding the 100 percent voting right are not provided. An email was sent to Buckner through the email address he provided to Ghana’s Registrar of Companies on September 15, 2022.

As at October 11, 2022, the mail had no reply, and so a call was placed to the telephone number he provided to Ghana’s Registrar of Companies. He answered the call and said he was driving and wants to park. That was it. Call was not returned. The content of the mail sent to his mail was sent to his WhatsApp line on Friday October 21. The message has been delivered and read, but no response.

Lastly, Maxmass Limited provides contract mining and haulage services with a Class A valid permit from the Minerals Commission of Ghana. According to the beneficial ownership information sent to Ghana’s Registrar of Companies, Kingsford Jojo Maxwell Todd, a Ghanaian, and Michel Angelo Massimino, also a Ghanaian and an engineer are listed as the only beneficial owners. However, both Todd and Angelo hold 13.18 voting rights respectively, totaling 26.36 percent. The remaining persons who hold the significant 73.64 percent voting rights are not disclosed. A mail was sent to both of them on September 15, 2022.

There was no reply for the September 15 email. On October 11, a call was placed to Todd. Asked why the voting rights are not adding up to 100 percent, he explained that, “It’s not a mistake, just that not all the shares have been issued… If we issue all the shares and then at a later stage we want capital again, we will have to go to the Registrar General and increase our share capital. But why do that, when you can issue a bit [of your shares] and leave some in reserve for future expansion?

Responding to question on why not list to the Registrar of Companies that you are the two beneficial owners as at now with 50 per cent voting rights each, so when you have new shareholders, you disclose them as well, Todd explained that “when we both have 50 percent voting rights, then we have issued 100 percent, so if somebody comes up, what will we issue again? That will mean that we have to sell some of our shares to the person, but we don’t want it that way. We will have some in reserve, so that if you come and you want to buy 5 percent of the shares, we will sell some to you at the appropriate money…”.

By Obrempong Yaw Ampofo
Copyright ©2022 by NewsBridge Africa
All rights reserved. This article or any portion thereof may not be reproduced or used in any manner whatsoever without the express written permission of the publisher except for the use of brief quotations in reviews.