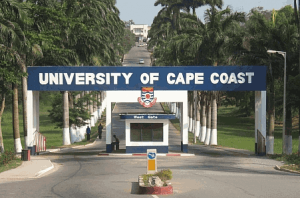 The University of Cape Coast (UCC) has appealed to its host communities agitating over boundaries and misunderstandings to return to the mandated Management Community Consultative Committee to resolve the issues amicably.

It also assured that its management was well determined to go all out to maintain peaceful co-existence with its host communities for mutual gains.

Major Kofi Baah-Bentum ((Rtd), Director of Public Affairs at UCC, gave the assurance at a press conference held on Wednesday evening to respond to some allegations made earlier in the day by leaders of some of the communities within Campus.

The communities such as Kwaprow, Akotokyir, Kakumdo, Kwesipra, and Amamoma staged a peaceful demonstration from morning till evening and presented a petition to the Central Regional Coordinating Council, the Regional Police Commander and authorities of UCC on some pertinent issues.

The petition signed by Chiefs from the communities and copied to Osabarima Kwesi Atta II, Omanhen of Oguaa Traditional Area, demanded immediate resettlement from UCC or its cooperation to solve the raging land boundary dispute permanently.

It accused UCC authorities of disrespect for the elders in the communities, neglect of Corporate Social Responsibility (CSR) and the destruction of ancestral tombs and playing fields at Kakumdo and Akotokyir.

Additionally, it lamented about restrictions on the movement of community members and consequently demanded that the Vice Chancellor refrain from visiting the communities.

He denied the accusation that the Vice-Chancellor did not respect elders in the communities and described the notion as far from the truth.

“This is why the Management/ Community Consultative Meeting was set up. When the Vice-Chancellor took office, he visited all the community heads and repeated every year as a sign of respect to the communities and elders.

Again, he explained that CSR activities were based on the availability of resources; hence, the University considered its current financial status before projects were carried out.

Notwithstanding, it tries to support the communities with scholarships and social infrastructure.

Major Kofi Baah-Bentum also denied knowledge of destroying ancestral tombs, restricting settlers, explaining that the decision that the Vice-Chancellor should not be seen in their communities, was unfortunate.

“The VC went through the selection processes and was appointed and was discharging his duties accordingly. If anybody has anything against his appointment, the best person to complain to, will be the appointing authority,” he explained.

Organised Labour revises base pay increment from 60 to 65%