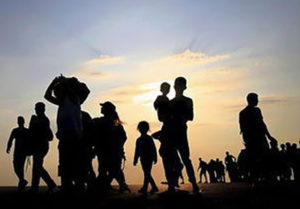 The exhibition was to raise awareness about the risk of irregular migration.

The speakers stated that it was perpetrated by criminal gangs, mafia groups, smugglers and traffickers who assisted the migrants across unapproved routes to destination countries and criminal entities who recruited them for work.

They said illegal migration was a crime and victims risked being charged and prosecuted to face incarceration.

That launch of the “Stop Tratta” photo exhibition as a platform to showcase migration stories and human rights abuses suffered by irregular migrants also included an intensive training of trainers’ event for ambassadors.

It was organised by the VIS Ghana, a non-governmental organisation (NGO) in collaboration with Don Bosco Youth Network, also a local NGO and 8Xmille Chesa Cattolica of Italy with funding from the Italian Catholic Bishop Conference.

The two-day event aimed at improving skills of community leaders and actors as part of a project to support local development meant to tackle irregular migration in Ghana, particularly in areas such as Sunyani, Berekum, Nkoranza, Dormaa-Ahenkro and Techiman noted as high departure illegal migrant centres of the Bono and Bono East Regions.

She cited migrants in the south of Italy noted for tomatoes growing lived in squalor, abject condition without access to basic services like water and electricity, were forced to work for 14 hours a day against the law for criminal organizations such as the ‘mafia’ who beat the migrants and report them to the Police.

“There are labour unions, civil society organizations (CSOs), journalists in Italy who highlight and take these issues about violation of human rights of irregular migrants up, but often these are not addressed to its logical conclusion. That is because such narratives are usually based on an illegality”, Mad. Tizzi added.

But ASP Atubiga added “these migrants don’t do due diligence as expected about their safety in the countries of destination, despite that our doors are opened for them to seek travel advice.”

“Concerning departure, we ensure you are not being lured. The GIS provides guidance to migrants to check authenticity of jobs abroad. As a law enforcement agency in-charge of regulating the movement of the people in and out of the country we look out for the trafficking of minors at the airports and various entry points”, he added.

ASP Atubiga therefore urged the populace, particularly the unemployed young men and women to take advantage of the numerous interventions in the forestry and agriculture sectors which has been introduced by government to improve on their socio-economic conditions.

He indicated at certain times the passports of irregular migrants are confiscated by these smugglers and traffickers who made them engage in hard labour against their will.

Speaking on “promoting social inclusion and reintegration of returnee migrants,” Madam Mariachiara Boldrini, an intern with VIS Ghana said the mafia group maltreated the migrants by subjecting them to inhumane condition.

She however added: “They can’t report these mafia groups to the local authorities because they are undocumented migrants”.

Report on Motion of Censure Against Finance Minister laid before Parliament