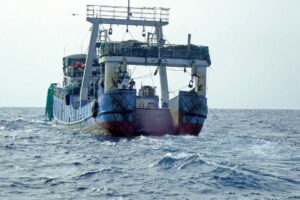 The Executive Director of Friends of the Nation (FoN), a non-governmental organisation, Mr Mevuta Donkris has expressed concern at the alarming rate at the practice of marine mammals’ bycatch among fishers.

He therefore called for a concerted effort from all stakeholders to stem the nuisance and stressed the need for the Ministry of Fisheries and AquaCulture  to streamline the yet to be gazetted Marine Fisheries Management Plan to factor the high incidence of cetacean bycatch into the Illegal, Unreported and Unregulated (IUU) policy under the improving fisheries Governance project.

Mr Donkris expressed these sentiments in an interview with the Ghana News Agency in Takoradi, as part of activities marking the celebration of this year’s International Fisheries Day,

He said as part of a decisive action, FoN with stakeholders in the marine space such as the Center for Coastal Management of the University of Cape Coast with support from the Oceans Associated Incorporated and the National Oceanic Atmospheric Administration under the auspices of the Fisheries Commission was making a strong case to design a database of marine mammals from the year 2022 going forward.

Mr Donkris said the database must cover selected hot spots on the coast to afford Ghana the chance to access the number of mammals.

He said as part of the process, Oil Marketing Companies (OMCs) could access environmental management plans to avoid collision in terms of vessel trafficking and advised coastal dwellers using marine mammals as delicacy to halt the practice as they played a pivotal role in the resilience of the ocean and ecosystem.

He urged the government to expedite action on the marine mammals law.

A Project Officer with FoN, Mr Eric Atiatorme also told the GNA that section 89 of the Fisheries law explicitly mandated fishers to release the mammals to sea during the bycatch and called for a robust enforcement regime to enforce the law.

He reminded fishers that the mammals were key to the food value chain as they protected the pelagic from big sea animals such as sharks and efforts were underway to reduce marine mammal bycatch by 50 percent at the end of 2022.

The Project Officer disclosed that FoN and its partners were in the process of reaching a Memorandum of Understanding with the Fisheries Ministry to inform regulators on a policy action plan.

Mr Atiatorme stressed the need to engender discussions on marine mammals as an Illegal, Unreported and Unregulated issue.

We paid for our mistakes – Andre Ayew