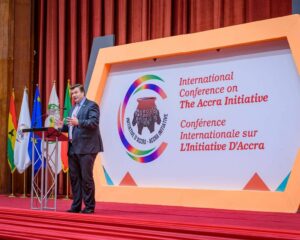 Mr James Heappey, the United Kingdom (UK) Minister for the Armed Forces, has concluded a two-day visit to Ghana where he attended the first major meeting of the Africa-led Accra Initiative.

Speaking at the conference, the Minister reaffirmed the UK’s commitment to supporting member states to address shared security challenges in the Sahel and Gulf of Guinea.

A statement issued by the British High Commission in Accra and copied to the Ghana News Agency said the West African led organisation was a regional effort to counter violent extremism and offers a strategic response to instability through the sharing of intelligence, diplomatic, military, and economic efforts.

It said the Initiative complements other regional organisations such as the Economic Community of West African States (ECOWAS), the African Union and United Nations.

Mr Heappey said: “It is great to be here in Accra, witnessing and participating in conversations about a collective African led solution to regional challenges which directly impact UK security interests.

“I have been enthused by the progress made since my previous visits to the region in the last 18 months and am looking forward to further close partnerships as the UK commitment to regional security endures.”

The statement said Mr Heappey attended the conference to discuss how the UK might best support its partners in the region.

He emphasised that any future package of support to West Africa must complement a wider international effort and should include military, diplomatic and economic elements if long term security is to be achieved.

In his speech, the Minister highlighted the impact violent extremism has on UK maritime security and migration routes, as well as the stability of the UK’s closest regional friends.