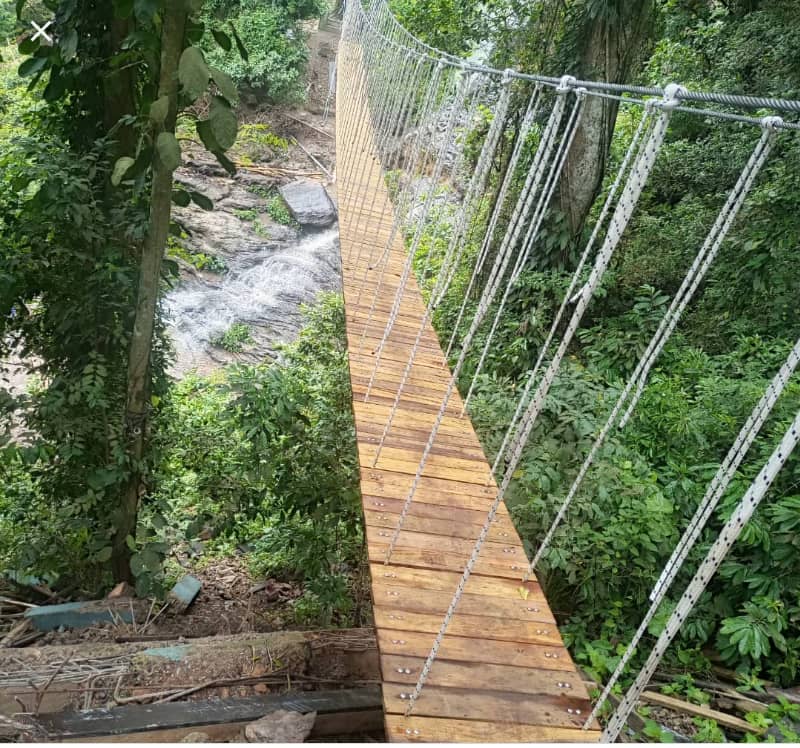 The Volta Region’s first canopy walkway has been opened at the Ote waterfall in the valleys of Amedzofe in the Ho West District.

The opening followed the completion of a multi phased ecotourism project, an initiative of Herp Conservation Ghana, a non-governmental organization (NGO).

The project claimed several hundred acres of protected area under a Onepone Endangered Species Refuge and had two canopy walkways rewarding an endearing trip down the 290-step with a more endearing closeup experience of the waterfall.

This development brings the number of canopy walkways in the country to five, including Kakum, in the Assin South District, Central region; Peninsula walkway and Bunso canopy walkway, in the Eastern region and the Legon Botanical Gardens canopy walkway, Greater Accra region.

Dr Archibald Yao Letsa, who opened the facility and took the first symbolic walk on the canopy, spoke of “showers of blessings” as one passed under the waterfall.

Locals told the GNA that plans to develop the falls begun in 1886 with the arrival of Germans colonizers, who dug out the first stairs to the basin.

The waterfall further into the community of Gbadzeme, and the onepone, a once extinct frog species has been discovered flourishing in the area.

The Regional Minister said the Government would provide the needed support for the sustainability and further development of the facility.

Alex Ofori Boateng, founder of Herp Ghana, noted the underpinnings of biodiversity conservation, and expressed the hope the development of the resource would go a long way to address climate change.

He commended a successful working relationship with host communities since the organization adopted the falls a decade ago.

“We are hoping to use ecotourism as, “a tool to support the community and help reverse biodiversity loss,” the founder said.

Alexander Nketia, Regional Director of the Ghana Tourism Authority, said it was “a dream come true” and stated how it would promote the area and help increase visits from the present 2800 annually.

He said stakeholders including the Government must help ensure the resource met visitor’s expectations, and called for the upgrade of roads, and the needed safety parameters and provisions for security.

Mr Nketia said the communities should be able to take advantage of the development to promote indigenous cuisine and other cultures as well as to seek to make the most of other opportunities in hospitality products and services.

He said the area provided an avenue for health and wellness tourism, and that the Authority would help provide the needed skills and support.

He was of the firm belief that the resource would carry along the needed development of roads and other public facilities in the area.

More than 800 acres is under conservation primarily to help preserve the onepone frog species, which is known to have some rare biological properties with mosquitoes as its diet.

The project is planting trees, and development of several rest stops around the conservation.

An annual tourism festival was inaugurated by the Regional Minister for the area, which is the highest mountain settlement in the country.