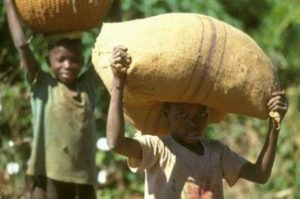 Ministry of Employment and Labour Relations says it is finalising an improved document for passage into law by Parliament to intensify efforts to end all forms child labour in Ghana.

Known as the Harmonised Hazardous Activity Framework, when passed into law, the comprehensive policy will support existing frameworks to end all forms of child labour in all sectors of the economy.

The framework is being put together by the Ministry and its development partners, with support from the Trade for Decent Work Project – a global project aimed at improving the application and compliance of conventions to end the worst forms of child labour.

A report from the second Ghana National Plan of Action (NPA 2) on the elimination of the worst forms of child labour estimated that 21.8 per cent (1.9 million) children aged five and 17, are engaged in child labour, with more than 1.2 million involved in hazardous work.

Mr Ignatius Baffour-Awuah, the sector minister, said the Government remained committed to ending all forms of child labour across all sectors of the economy.

Speaking at the fourth National Child Labour Steering Committee meeting in Accra, he said the approach of the new framework was not to focus on child labour in the cocoa sector but ending it totally in all spheres.

The Minister said the new legislation, when passed into law, would do away with all the misunderstandings on what constituted child labour and give prominence to Ghana’s cultural heritage on the subject.

He said the Ministry would ensure that children under age 13 were taken out of any form of harmful work, well-educated and empowered for the future.

He also said that the Ministry would ensure that children between 13 and 15 years did “guided work,” while those aged 15 to 18, worked under supervision to protect them from being exposed to any form of hazard.

“We will not relent on our efforts in making sure that we protect our children. We’re ready to work with our partners to get our children out of the street and hard labour so that they’ll dedicate all their energies to study and grow to contribute their quota to national development,” Mr Baffour-Awuah said.

While encouraging international partnerships to end all forms of child labour in Ghana, Mr Baffour-Awuah said: “What we do not want, is the superimposition of foreign cultures on us and marking us with cultures of different countries.”

“It is for this reason that we’re developing the homegrown framework of activities, which takes into consideration our cultural heritage,” the Minister added.

The Bureau of International Labour Affairs of the United States of America reports that in 2021, Ghana made moderate advancement in efforts to end the worst forms of child labour.

The efforts include the Government developing a Public-Private Partnership framework to address child labour in the cocoa industry.

It noted that the Government also drafted a new national plan of action to end human trafficking, with the Ministry of Gender, Children, and Social Protection developing a communications strategy to guide outreach efforts on human trafficking issues for the years 2022–2026.

WAHO, WHO build capacity of stakeholders on cholera elimination