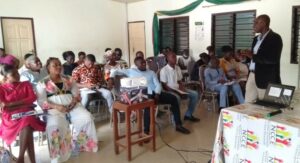 The Ghana Integrity Initiative (GII), a local chapter of Transparency International, in collaboration with the Ningo-Prampram District Directorate of the National Commission for Civic Education (NCCE), has sensitised residents of Ningo-Prampram on the importance to demand accountability from public officers to curb corruption.

At a citizens’ engagement on the impact of corruption on society and to equip residents with knowledge to report corrupt officials to the appropriate authorities, Mr Michael Boadi, the GII Fund-Raising Manager, said citizens’ participation in monitoring and demanding accountability from public officers would aid the fight against corruption.

He said citizens as well as stakeholders including the NCCE had a major role to play in ensuring corruption and its related issues were dealt with in the country.

Mr Boadi said the NCCE’s role in educating the citizen on their rights and privileges and the means through which to exercise those rights could not be overemphasised.

He said huge sums of state funds earmarked for development projects mostly went unaccounted for, and that citizens should look beyond their political parties and report those issues to the appropriate bodies for redress.

Mrs Petra de Graft-Johnson, GII Officer In charge of Advocacy and Legal Advice Centre, said the centre served as a platform for citizens to report cases of corruption as they had witnessed.

It also provided free and confidential advice to victims and witnesses of corruption, encouraged and supported people to access public information to demand accountability from government institutions, she said.

The GII and NCCE set up a 13-member Social Auditing Club for the Ningo-Prampram District to ensure public officeholders were accountable to the citizens.