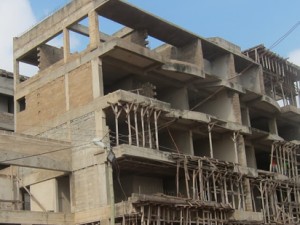 Many construction and real estate companies are finding it difficult to sustain their businesses in the economic crisis.

Mr. Simon Sawer Tetteh, Managing Director of Sawer-Nanor and Sons Company Limited, who told the Ghana News Agency in an interview, said many the companies were, therefore, either downsizing their workforce or shutting down completely.

This is because they were no longer able to cope with the effects of the frequent price hikes of the materials needed for their work amid paying their workers.

“The construction industry is hit hard by the current economic hardship, so as business people we are either laying off some of our workers or trying to strategise to just break even, and sometimes we record a complete loss on a project,” he emphasised.

“The price of a load of chippings also increased over the period from GH¢3,000.00 to GH¢4,500 and is currently selling at GH¢5,500 – these are astronomical increases that you cannot manage as a contractor because it has a huge bearing on the cost of the project.

“Recently we checked our books, and we realised that the variations alone are over 52 percent of the contract price, you can imagine that if you are doing a project and such a huge percentage of cost must be added, you are in trouble.”

In view of the high variation in the project cost, Mr Tetteh said, most of the works his company was handling had stalled as clients were unable to pay for certificates raised after the works.

This was resulting in job losses, and confusion among clients, contractors and their workers.

It had become difficult to pay the salaries of workers as clients were unable to pay for the job done.

“Workers are asking for wage increment at the same time when the work itself is not available – we are in very difficult times!” he stressed.