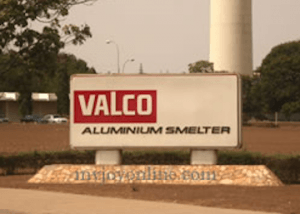 The Management of the Volta Aluminum Company (VALCO) has denied workers’ claim that the restarting of its smelter after a shutdown following staff agitations will cost the Company over $10 million.

The Management on October 31st shut down the 127 cells of the smelter after workers went on a demonstration to back their demands for salary increment and the removal of the top management of the company.

The aggrieved workers described members of the management as “retirees who were not adding any substantial value to the running of the company.”

A press statement jointly signed by Dr. Henry Benya, and Mr. Dan Acheampong, Board Chairman, and Chief Executive Officer of VALCO respectively and copied to the Ghana News Agency in Tema, denied the workers assertions.

“We wish to also state emphatically that it will not cost about $100,000 per pot in shutting down and $10 million in restarting the plant. Rather, it is to prevent such occurrences that management opted for the controlled halt to its operations,” they stated.

It explained that the Board of Directors being conscious of the strategic significance of the Smelter to the ongoing Integrated Aluminum Industry (IAI) Project, fully discussed at its last meeting, the likely negative consequences on the Project in particular, and Ghana’s accelerated economic development in general.

The Board, therefore, charged Management to ensure that Ghana does not lose the Smelter in the event of any agitations that would occasion an unplanned shutdown.

It stated that following the unannounced takeover of the smelter on Monday October 31, 2022, by some workers, management took the decision in line with the Board’s directive, to immediately work with the Ghana Grid Company (GRIDCo) to take down the line in an orderly fashion to save it to allow for a smooth restart as soon as possible.

Responding to salary increment issues raised by the agitated staff, Management intimated that worker, after a series of negotiations led by their union executives, made an initial demand of a 62 percent but subsequently reduced it to 55 percent.

It added that “in response, the Management of VALCO, offered to grant a 22 percent with the assurance of further increment in the future as VALCO continues its efforts in finding a strategic investor to retrofit the plant.”

The VALCO Management appealed to the workers to consider the current state of the Aluminum Smelter which, for years, had been recording losses until 2021 when it chalked some modest gains recording Earnings Before Interest, Tax, Depreciation & Amortization (EBITDA) profits.

It said: “Management of VALCO further indicated to the workers union executives that they will on November 1, 2022, finalise a communique for submission to the National Labour Commission (NLC) for independent third-party adjudication in accordance with law after negotiations between Management and the workers ended up in a stalemate.

“However, the workers would have none of this and on October 31, 2022, embarked on a full-blown takeover of the Smelter, insisting they would not allow the Executive Management into the Plant.”

However, the parties (management and the workers) were unable to reach an agreement and declared a deadlock on Friday, October 28, 2022.

It stressed that since the salary of the Ghanaian worker was not indexed in the US dollar, but rather the Ghana cedi, the demands from the workers to have their salaries pegged to the dollar was untenable and must be disregarded.

The statement said to protect workers against the effect of depreciation, management and the Industrial and Commercial Workers’ Union (ICU) periodically met to agree on the quantum of salary increase in accordance with the existing Collective Bargaining Agreement.

Touching on the accusation of top management staying on after retirement, they stated that “We wish to state that the decision to allow some staff, whom we consider experienced and knowledgeable in the running of a highly technical field and a strategic plant as the VALCO smelter, a continuous stay was deliberate and tactful.

“They may have attained the retirement age but have not retired yet as they have been engaged legally on contractual basis, a situation that is not peculiar to VALCO but adopted in special situations by several private and public institutions especially where the services of such persons are needed in a specialized field.

“Their continuous stay in their respective positions has not only helped to impart knowledge but led to a positive turnaround of the Company.”