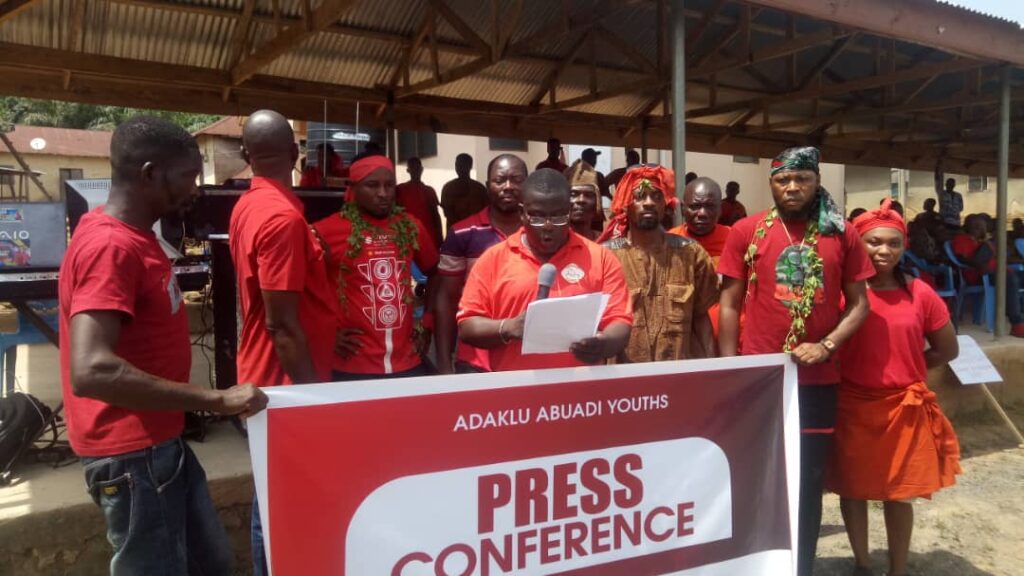 The youth in Adaklu Abuadi in the Volta Region have risen against Greenhouse Company, a Chinese-led quarry entity producing chippings from rock formations in the community.

The company is known to have been established to provide materials for road construction.

It has been operating for about a decade.

The youths and other natives of the area from across the country demonstrated against the quarry firm, alleging the community had not in a way benefited from the activities of the company.

Clad in red mourning clothes, they marched on the streets, wailing over the destruction caused to the road by heavy duty trucks.

They said despite not benefiting from the enterprise in any form, site blasts reverberated through the community buildings and was causing their collapse, and locals working at the quarry were maltreated by the foreigners, always armed with guns.

Some placards carried by the youth in the sweltering procession read: “The Youth Say No to Tyrants,” “Chinese, Your Cup is Full,” “Enough is Enough,” “Action Now! Our Buildings are Collapsing,” and “Abuadi Deserves Better.”

Others were: “MP Agbodza Show Your Concern,” “Abuadi Must Develop by Force,” “The Chinese Must Leave Immediately,” “The Quarry is a Nuisance in Abuadi,” and “If you don’t act immediately, We will be Inhumane.”

There was hooting sounds as the youth made their way to the community centre to deliver their address and were joined by other groups in the Diaspora.

Raymond Akadi, representative of the youth, and conveyor, said the company has been operating in Adaklu Abuadi since September 2012 till date.

“Their activities had resulted in so many havoc that the community has suffered from with no known confrontation or benefit to the community whatsoever; therefore, the youth think the reasonable alternative is for the Chinese company to stop their operations to save the community from associated health issues.”

He added that “based on the operations of the Chinese Company, we believe our basic human rights have been violated,” and mentioned the “dilapidation of buildings in the community because of frequent dynamite blasts.

There is also the “fear of farmers on the field and in the community as a result of flying pebbles, while at work as well as hitting the roofs of the houses near the quarry site in the community day and night.”

The pollution of the environment by the dust and noise and accompanying health hazards were of concern to the agitated youth as they enumerated the way the community lost its freedom to the quarry activities.

“The incessant plying of heavy-duty vehicles on a 24-hour basis has created manholes leading to rendering the road from Adaklu Tsrefe to Adaklu Waya impassable and intimidation by gun-wielding Chinese leaves much to be desired.

“Drivers are not willing to ply the road from Tsrefe to Abuadi because of its worse nature, whenever natives visit Ho and are returning home we are made to alight and walk or are compelled to pay extra exorbitant fees.” 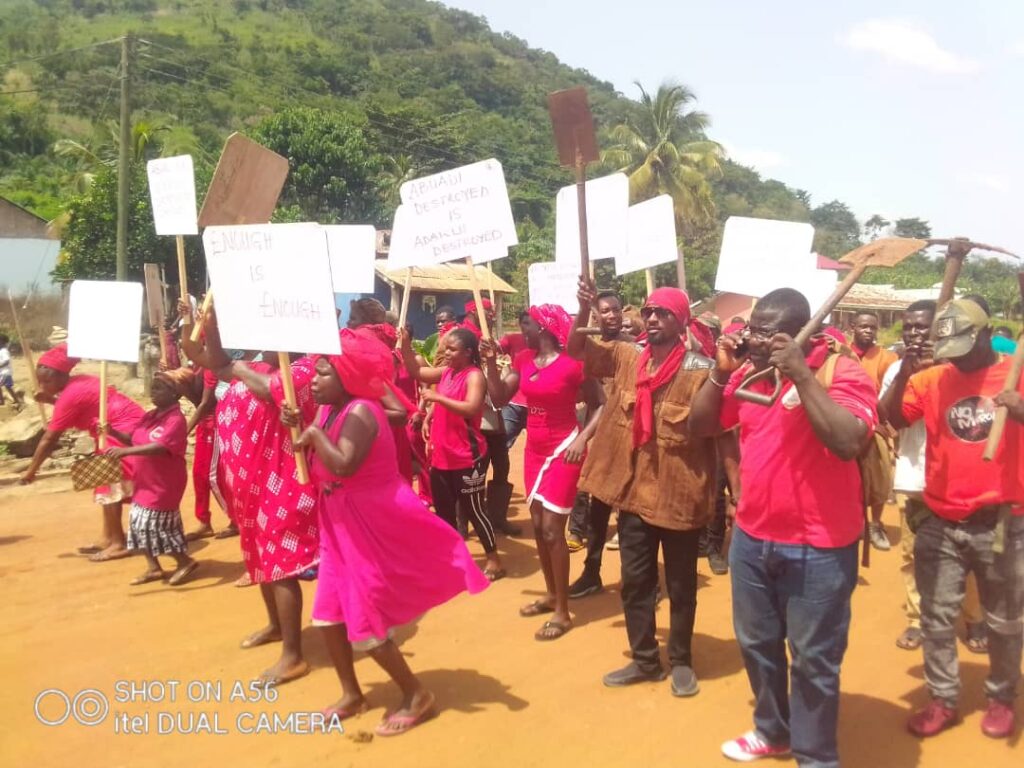 The youth representative said they felt the Chinese had connived with the community’s leadership in taking undue advantage of the resource.

They demanded contract details, as well as environmental impact and social assessment of the concession, and demanded to know the details of corporate social responsibility attached, and an account of “all royalties paid to the community so far.”

They questioned “why stones will be quarried in Adaklu Abuadi and used to construct other roads while the community roads remain bad.

“It is our resolve that the operations of the quarry by the Chinese company have become a nuisance in the community. Based on that we are appealing to the Paramount Chief and his elders and the District Chief Executive to notify the contract awarding institution/individual to instruct the Chinese to halt their activities and vacate the site with immediate effect.

“Failure to adhere to the above, the youth will advise themselves as they deem fit,” the conveyor said.

Elders of the community were present to receive the petition and promised to forward it to appropriate authorities.

“Ten years of quarrying should have developed Abuadi by now,” Etornam Anorson, Assembly member for the area said, and commended the united resolve to change the narrative.

The Assembly member told the Ghana News Agency (GNA) that royalties on the concession were being controlled by the royal family, and that several attempts to help expand stakeholdership had not been fruitful.

“We want the company to have a relook at their corporate social responsibility. If even it is not in agreement, it should be considered in the name of humanity,” Mr. Anorson said, and hinted that some legal actions were considered.

The GNA’s attempt to reach management of the company proved futile, and met the facility guarded by security and armed Police.

Madam Juliana Kpedekpo, Adaklu Chief Executive disclosed to the GNA she was yet to receive any petition from the youth.