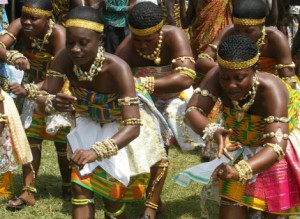 The National Commission on Culture says the celebrations of the National Festival of Arts and Culture (NAFAC) must go beyond the usual display of pomp and pageantry.

The Commission said it was important for the country to factor into NAFAC, programmes and activities that would inspire the younger generation to be patriotic and nationalistic in their actions.

Mrs Edna Janet Nyame, the Executive Director, made the remarks in an address read on her behalf during this year’s Volta Regional Festival of Arts and Culture held at Lume, a farming community in the Ho Municipality.

The Executive Director said the world was fast changing through international and cross-cultural linkages and collaborations, affecting every country by the fast-blowing wind of globalisation.

This wind, she said, had in one way or another affected “almost every aspect of our national life including culture thus NAFAC must not be limited to the usual display of pomp and pageantry scenes which often characterise its celebration.”

Mrs Nyame said arts and culture celebration represented a period for stock-taking and a call for deeper reflections into “who we are, how we live, and of course, the ideas we cherish as a people.”

She called on Ghanaians home and abroad to help promote and showcase the nation’s rich culture and tradition, which she said had over the years helped to promote virtues, including patriotism and peaceful coexistence.

She described the theme: “Reviving Patriotism, Peace and Unity, through Cultural Diversity for Sustainable Development” as apt as many cultures across the globe were facing threats of extinction due to globalisation.

She said the Centre for National Culture was the statutory body with the mandate to preserve and promote cultural activities and called on stakeholders to support the Centre to deliver its mandate.

The Director commended management and staff of the Centre for their hard work despite the financial challenges they faced in the delivery of their duties.

Dr Archibald Yao Letsa, Volta Regional Minister, in an address read on his behalf, said arts, culture and tourism played a significant role in promoting peace, unity and socio-economic development of the nation.

He said culture helped to bring more clarity to people’s perception about life and the world around them as well as prepared them to contribute to the growth of their community and country.

“We have found ourselves in a time in which the continuous display of patriotism to our motherland through our cultural behaviour as one people with a common destiny cannot be overemphasised,” he added.

Togbe Agbenyedzo IV, Paramount Chief of Lume Traditional Area, charged the youth to hold fast to the nation’s culture and endeavour to protect, promote and preserve it at all times.

He expressed concern that the youth were not much interested in the culture and tradition of the country and called for attitudinal change to promote the nation’s cultural heritage.