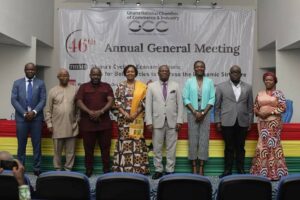 The Ghana National Chamber of Commerce and Industry (GNCCI) has proposed to the government to work with the Multinational Companies operating in the offshore Oil & Gas sectors to keep part of their dollar earnings with local banks.

Mr Clement Osei-Amoako, President of GNCCI, said the move was to enable the companies to consider settling a portion of about 20 to 30 per cent of their dollar revenues with local banks for Ghana Cedis rather than in their offshore accounts with international banks.

Mr Osei-Amoako was speaking at the 46th Annual General Meeting of GNCCI for the year 2021 on the theme: “Ghana’s Cyclical Economics Crisis: Time for Bold Policies to Address the Economic Structure” in Accra.

He said the measure, when properly implemented, would shore up the country’s foreign currency reserve and further strengthen the domestic currency.

He said GNCCI stood ready to assist the Government in working with identified companies in the respective sectors to implement this very important assignment when invited.

He said Ghana had been in a state of perpetual high-interest rates because of fiscal dominance of economic policy.

“It is high time as a country we live within our means. The acceptance of a fiscal deficit in the nation’s finances is unacceptable and has been the reason for the government competing with the private sector for capital with a high-interest rate,” he added.

He said the Chamber believed high-interest rates that had been a bane to the nation’s private sector growth could only be fought with a balanced budget.

He said the fiscal crisis “we are facing is a watershed moment for Ghana and this provides the opportunity to reset our development and proactively address government spending to bring interest rate significantly down to make industries competitive within the sub-region.”

He said the meeting afforded him the platform to discuss with stakeholders how best to scale down the bottlenecks affecting businesses and the plight of ordinary Ghanaians.

He said some of their concerns include the rising cost of doing business in the country due to the rapid depreciation of the cedi against major foreign currencies, interest rates, high fuel prices, and high inflation policy rates.

“More specifically, the outlook for the country’s economy is getting worse due to rising public debt, weak domestic revenue performance, the balance of payments issues and a lack of fiscal restraint, which led to a credit rating downgrade and the loss of external financing,” he added

He assured stakeholders of the Chamber’s collaboration with the government to bring the situation under control and urged members to remain calm and collaborate to support the design and implementation of programmes that will strengthen businesses and the national economy.

Mrs Nkechi S. Owoo, Senior Lecturer at the University of Ghana, said the relationship between the State and the private sector had been volatile and closely linked to changes in the political regime.

She said there was a need to revive major factories in Ghana like the Pwalugu tomato factory and the Komenda sugar factory, where the government could partner with the private sector to grow them.

“These can reduce our import bills on sugar, rice and tomato, and serve as raw materials for industries,” she added.

She said there was a need to critically take the industrialisation agenda of the government even more seriously than before.

She said Ghana may be losing its comparative advantage in the production of Cocoa globally because China was aggressively growing cocoa and already exporting to the European market.

Mrs Owoo said there must be bold policies that should be informed by research, experience and sound judgement and that political will and commitment on the part of the government.

Value addition is key to capitalizing on AfCFTA