Mahama calls for legislations to ban collateralisation of statutory fund 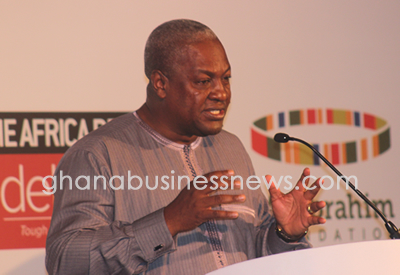 Former President John Dramani Mahama has called on Parliament to pass legislations that will stop governments from using statutory fund as collateral for loans.

He said the “wanton collateralisation” of almost all statutory funds for the purpose of taking more loans had been unhelpful.

It had limited the financial capacity of the funds set up to help government meet basic obligations, the former President said Thursday evening in an address on the economy hardship in the country on the theme: “The Ghana we want”.

The situation, he said would inhibit the chances of future governments to run successful administration due to limited access to financial resources.

“Government should de-securitise these funds and add them onto the public debt as part of the discussions on debt restructuring, ” he said.

Mr Mahama estimated that freeing the funds from the burden of collateralisation and the renegotiation of energy sector Independent Power Producer Payment (IPP) payment could guarantee government access to revenue of about GH¢ 16 billion in 2023 to GH¢ 19.4 billion in 2025.

“This will significantly ease the cash-crunch, which has crippled many sectors resulting in government’s inability to meet such basic obligations as supplying food to secondary schools and providing textbooks for basic schools, ” he said.

Mr Mahama called for a moratorium on all non-concessional borrowing, canvassing bilateral partners for more concessional financing and grants and a stop to Central Bank’s financing of government above the five per cent threshold, especially through currency printing.

He also called on government to leverage its competitive advantage in the energy sector to partner the private sector and mobilise the needed infrastructure and investment to export energy to other west African countries and save foreign exchange due to limited importation.

“It is regrettable that in the last six years, Government has been unable to bring any new oil or gas prospects into operation,” he noted.