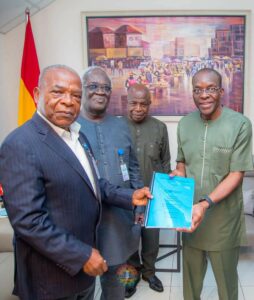 Mr Alban Sumana Kingsford Bagbin, the Speaker of Parliament and Chairman of the Parliamentary Services Board, has received a draft Parliamentary Transition Bill from the Center for Democratic Transitions (CDT).

A statement issued by the Communications Directorate at the Speaker’s Secretariat and copied to the Ghana News Agency said the Draft Bill was presented to him in Accra by Professor Kwamina Ahwoi and Nana Ato Dadzie, both consultants with the CDT.

It said the purpose of the Draft Bill, therefore, was to ensure a smooth, seamless, and peaceful transition for the legislature.

The statement noted that the Draft Bill was like, but different from the Presidential Transition Act, which was passed for the executive for a similar purpose.

It said the Parliamentary Transition Bill focuses on the peculiarities of the legislature in periods of changeover, and what the experience had been so far.

It said the idea of enacting legislation in a Parliamentary Transition Bill dawned on Speaker Bagbin immediately after he assumed office after the nasty and acrimonious election process on January 7th, 2021.

Speaking after a presentation on the Draft Bill and related documents, Speaker Bagbin said the Parliamentary Services Board commissioned the drafting of the Bill to help bring closure to some of the unregulated and contestable aspects of what had been the processes, procedures, and practices when it comes to parliamentary transition.

He spoke about instances, where there had been expectations of the Speaker or the Clerk to Parliament, when in truth that mandate did not exist and said the Draft Bill took a retrospective look at what had happened in the past, considered today’s hung parliament, anticipated what could happen in the future and provided direction and guidance.

Presenting the Draft Bill to the Speaker, Professor Ahwoi gave examples of the gaps the Bill would help close.

He said the election of the Speaker of Parliament had hitherto been done by elected Members of Parliament (MPs) who had not been sworn into office, which was problematic and could raise legal issues and proposed that election of the Speaker should be by constituting elected MPs into an electoral college to conduct that business to help circumvent the current challenge.

Professor Ahwoi also suggested that to avoid unnecessary complications and complexities in the future, consideration should be given to requesting the Electoral Commission (EC) to be responsible for the election of the Speaker of Parliament.

The Speaker, once elected and sworn-in, would then supervise the election of the deputies.

These, he said, would have to be done at least two days before the Speaker presided over Parliament for the swearing-in of the President-elect of the Republic, in consonance with the Presidential Transition Act.

When validated, considered, and passed, the Parliamentary Transition Act would govern how the offices of the Speaker, Leaders of the House, and MPs transition from one person to the other to ensure continuity, sustainability and enhance parliamentary democracy in Ghana.

Present during the presentation was Mr Cyril Nsiah, the Clerk to Parliament, and other officers of the Parliamentary Service.

Samini says to Akufo-Addo: We can only pray for a better tomorrow

SHS applicants said to be unable to defend grades at interview