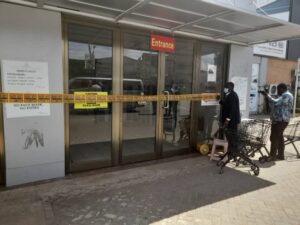 The Ghana Revenue Authority has closed four branches of Palace Mall due to non-compliance with the electronic-invoicing system for Value Added Tax (VAT), introduced by the Authority.

The Electronic-Value Added Tax (E-VAT) system, which came into effect on October. 1 2022, is to monitor the issuance of certified invoices by taxpayers.

The Labone, Spintex, Atomic roundabout and Weija branches of Palace Mall were affected by not rolling on the Commissioner-General’s system.

However, the taxpayers closed two branches themselves and the others by the Authority. The enforcement team sealed entrances of shops with the Commission-Generals tape to prevent taxpayers from operating.

In an interview with the Ghana News Agency, Mr Joseph Annan, Area Enforcement Manager of GRA, Accra Central, said the exercise was to ensure that these selected taxpayers comply with the law.

He continued that the Commissioner-General’s tape used to seal the shops must not be tampered with.

“Tempering with the tape can compound your problem, it can lead to imprisonment,” he cautioned.

He advised taxpayers to guide the tape and visit the office to be rolled on the system to ensure smooth operations.

He said, “the shops will be under locked and sealed until they do the needful, the exercise will later be extended to taxpayers who have failed to comply.”

The enforcement team later visited Regal Chinese Restaurant in Osu, Accra to close it down for not hooking onto the Commissioner-General’s system.

However, Mr Eddie Xhin, Managing Director of Regal Chinese restaurant, expressed worry over the action, saying it will affect operations.

He said that he tried to hook on to the system, but the system was slow due to a bad network.

Employees of the restaurant looked stranded and baffled by the situation.