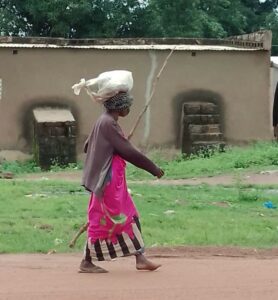 A viral picture circulating on social media about an alleged magical woman has created fear and panic among the people in Tumu and the Sissala area.

The mystery behind the picture stipulates that the woman possessed the magical powers of touching people and vanishing with them, which the security in the Sissala East has dispelled.

This follows days and weeks of fear caused by the alleged presence of the woman in the Sissala District, scaring most people from going to their farms.

Some parents even restricted their children from going to school.

In the viral picture, sighted by the Ghana News Agency (GNA), the said woman is seen carrying a sack of load, walking and holding a long stick. She wears a sweater, with a cover cloth over it.

The accompanying picture has an attached audio voice in the Sissali language warning residents to stay away from assisting the old woman if she sought help to carry her load.

On Sunday October 09, 2022, a woman, named Tabsoba, was mistakenly identified by residents in Sakai, Kowie, and the Tumu township as the woman in the viral picture in circulation.

A milling crowd followed her to the Ghana Burkina-Faso border with the Sissala East.

When security officials, led by Chief Superintendent William Essah of the Ghana Immigration Service in the Tumu border interrogated her, she spoke in the Moshie language through an interpreter where she mentioned her name as Madam Tabsoba.

Chief Supt Essah told the Ghana News Agency (GNA), that Tabsoba said: “I came to Ghana through Hamile during the farming season to Wa and walked for 20 days to Tumu from Wa looking for what I will eat.

“Everywhere, I reached and needed water to bathe or drink, I got beaten for reasons I do not know,” she told a team of security persons at the border.

According to Chief Supt Essah, when a search was conducted on her, she did not have any form of identity card but had clothes, soap, flour, and a bucket for bathing.

When she was asked why many people claimed anyone who touched her would vanish, she laughed it off and denied the claim.

She indicated that she wanted to go to Leo, a community in Burkina-Faso, which the security people obliged and allowed her to go.

After she related her pathetic story to the security some people at the border supported her with some money while others got her food before leaving for Leo.

After she related her pathetic story to the security, some people at the border supported her with some money while others got her food before leaving for Leo.

Chief Supt.  Essah said Tabsoba’s posture suggests that she had mental problems and advised the public against spreading fake news, especially false news about the vulnerable.

He advised the people to go about their businesses including farming since the picture and its accompanying audio was fake.

Meanwhile, Mr Alfred Kutajera, the Manager of Nabina Radio in Navrongo denied ever hearing of a vanishing old lady from Navrongo where the audio is said to have generated.

Some inhabitants of the Sissala West communities of Jeffissi, Pulima, Lilixia, and Kandia told the GNA that the viral picture scared and prevented them from going to their farms.