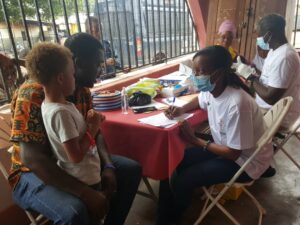 Professor Fiifi Ofori-Acquah, the Director of the GhGenome Project, has advised the public to seek screening on genetic diseases such as sickle cell, breast, and prostate cancers for timely detection and treatment.

He said sickle cell disease, breast cancer, and prostate cancers were the most common genetic diseases in Ghana and the world, describing them as dangerous.

Prof Ofori-Acquah, who is also the Director of the West African Genetic Medicine Centre (WAGMC), gave the advice in an interview with the Ghana News Agency (GNA) in Wa at the weekend during a free health screening for the people in the Upper West Region, particularly Wa and surrounding communities.

The children were screened for sickle cell disease, breast cancer for women, and prostate cancer for men under the GhGenome project.

He explained that they were doing a regional tour with the screening exercise in collaboration with the traditional leaders using the traditional festivals as a medium to achieve their objective.

He explained that the GhGenome project, through the assistance of its patron, the Okyehene, secured funding support from the cooperate community and partly from the World Bank-funded WAGMC to execute its activities.

He indicated that the project was aimed to provide public education on genetics through the media and public lectures, free screening for three common genetic diseases (sickle cell disease, breast cancer, and prostate cancer), and Whole Genome DNA sequencing of 1,000 Ghanaian children with Sickle Cell Disease.

Prof. Ofori-Acquah said funding for the DNA sequencing for the first 500 children had already been secured from a grant in the United States.

The Director added that the World Bank-funded WAGMC was also to provide post-graduate programmes in genetics (MSc in genetic counseling, and MPhil and PhD in Medical Molecular Genetics) at the University of Ghana.

Prof. Ofori-Acquah said the primary purpose of the World Bank funding was for the Centre to train post-graduates in molecular genetics but said “We decided that we want the work we are doing to touch our people in various parts of Ghana, so the GhGenome was conceived to impact the Ghanaian society.”

He said the MSc project was already ongoing while the MPhil and PhD programmes were still under review at the University of Ghana for approval and subsequent referral to the Ghana Tertiary Education Council (GTEC) for consideration.

Some beneficiaries of the screening thanked the GhGenome team for the intervention and said it would help them to know their health status regarding Sickle Cell Disease, breast, and prostate cancers.

“It is very helpful to me. The economy is hard so I cannot get the money to do this test, but I am also a farmer and always I have body pains.

So, if the results come and I have any condition I can then start looking for ways to treat it”, Mr Sanbanaa Daare, a beneficiary told the GNA in an interview.