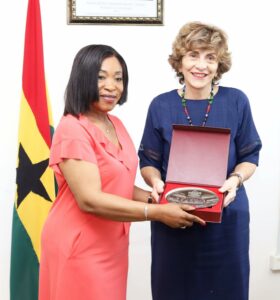 Madam Claudia Turbay Quintero, the outgoing Colombian Ambassador to Ghana, has paid a farewell call on Madam Shirley Ayorkor Botchwey, the Minister of Foreign Affairs and Regional Integration, and expressed gratitude to the Government and People of Ghana for the support she received during her tenure.

Madam Quintero, who was also the Dean of the Diplomatic Corps, said the  immense support she received helped to deepen the bilateral relations between Ghana and Colombia.

She said her topmost desire was to see the two heads of state forging closer ties to further deepen the already warm and cordial bilateral relations.

She encouraged Ghana to explore the opportunities offered by the markets of the Pacific Alliance, comprising four Caribbean countries; Peru, Mexico, Colombia, and Chile.

Madam Botchwey congratulated the Ambassador on the successful completion of her tour of duty to Ghana, as well as the successful celebration of the 212th Independence Anniversary by the Government and People of Colombia on 20th July, 2022.

She expressed the hope that succeeding anniversaries would further enhance the bonds of goodwill and cooperation between the two countries.

The Minister also recognised the sterling leadership of Madam Quintero as Dean of the diplomatic corps in Ghana and commended the diplomatic community for the valuable contribution towards Ghana’s national development.

She indicated Ghana’s readiness to strengthen its relations with the Pacific Alliance and wished Madam Quintero well in her future endeavours.