Galamsey must be seen as existential threat to Ghana

The horrifying images we are seeing of the disturbing phenomena of illegal mining known as galamsey that is practically suffocating Ghana didn’t start today. But has now reached dimensions that make the threat an existential one.

Even foreigners have seen the weaknesses in the system and are exploiting it by entering the country and inflicting more damage to extract as much of the precious mineral as they can, leaving in their trail more devastation and poisons.

The impact of galamsey on Ghana has been seen in the snuffing out of young lives. Every year young people are killed by collapsing galamsey pits or they suffocate from lack of oxygen in underground pits and die from inhaling carbon dioxide, and yet the national response has been more in loud meaningless speeches, and aimless campaigns that end nowhere. With time the perpetrators have been emboldened, as it does appear they have political and traditional powers behind them, indeed, politicians, their friends, families, and cronies and traditional rulers, empowered with the responsibility to protect the land are also involved in no small measure.

The canker of galamsey in its current form and scale is one clear evidence that shows the failure of the Ghana State. The rate and scale at which the canker is spreading and deepening is at the whims and caprices of political players who having rendered State institutions dysfunctional are having a field day raping the land, polluting the waters and poisoning the food chain.

Galamsey is not an accident. It’s a deliberate act of destruction, an existential threat akin to declaring war on the country, driven largely by greed and to some extent an unjustified act of survival by the many unemployed, who have no interest in the future nor unborn generations.

It is conceivable at this stage to start worrying about the types of chemicals that have been and are being used in illegal mining and their impact on human health, water and the food chain. Chemicals like lead, cyanide and mercury. These heavy metals have potentially contaminated water bodies, farmlands and underground water both closer to mining sites and far due to running water from polluted rivers, streams and ponds that get washed by rain. Aquatic life have potentially been contaminated as well and these are being ingested by people and as has been pointed out recently by a nephrologist, there are increasing cases of kidney diseases in mining communities. 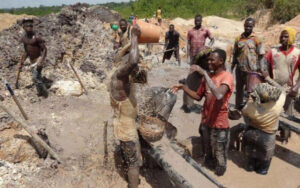 It is even more disturbing considering the fact that there are laws and legally mandated state institutions empowered and resourced to ensure that galamsey doesn’t happen and that even it did, it would have been sufficiently controlled to minimize the level of danger the entire country and its future has been exposed to.

And to think that these State institutions have become impotent in dealing with and in some cases have even become complicit in the mindless onslaught on our very survival leaves too much to be desired.

Galamsey is not an accident. It’s a deliberate act of destruction, an existential threat akin to declaring war on the country, driven largely by greed and to some extent an unjustified act of survival by the many unemployed, who have no interest in the future nor unborn generations, and until Ghanaians see it as such, the haphazard and nit-picking approach to resolving it would yield nothing, but more destruction and death.