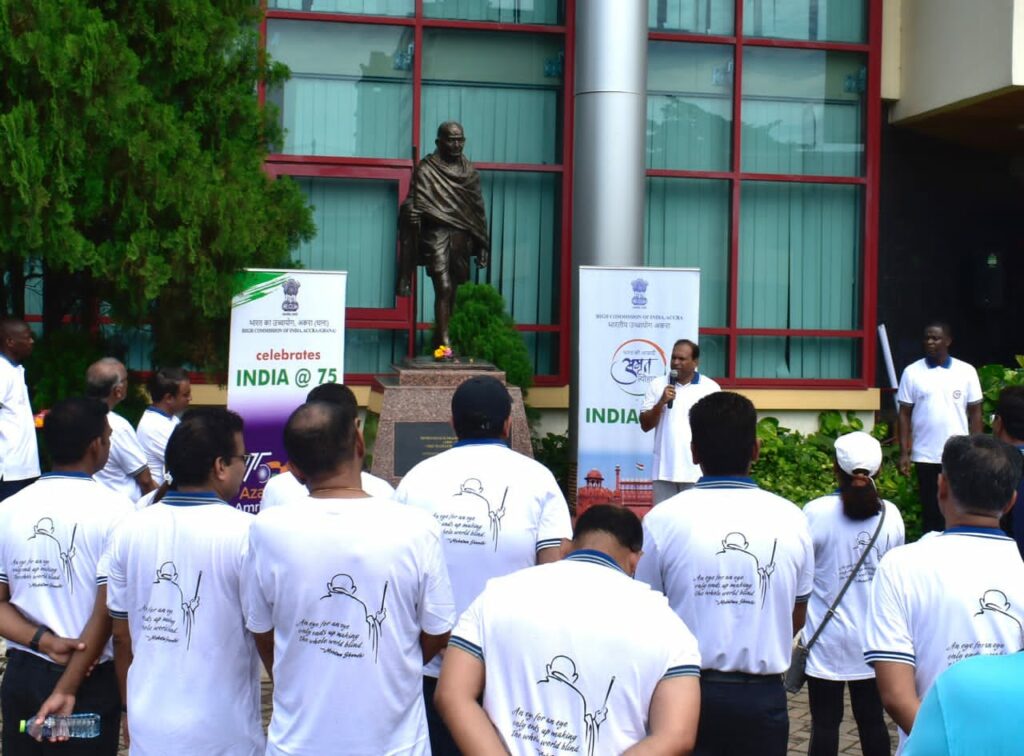 The India Community in Ghana has commemorated the 153 anniversary of Mohandas Mahatma Gandhi, late leader and the foremost campaigner for India’s independence, in Accra.

The birthday of Gandhi also marks United Nations’ International Day of Non-violence, which celebrates the virtues of tolerance and togetherness expounded by the late leader.

The Indian Community convened at the Ghana-India Kofi Annan Centre of Excellence in ICT, where Mr Sugandh Rajaram, Indian High Commissioner to Ghana, addressed them.

They also embarked on a 40-minute Peace Walk through some principal streets of Accra to commemorate the Day.

The Community also sanctified the statute of Mahatma Gandhi at the Centre.

The Indian High Commissioner said the Day was significant and offered lessons on peaceful coexistence among humanity expounded by the late leader.

He stressed that the virtues of peaceful living and Non-violence, which Gandhi propagated were as significant today as it was then in sustaining peace in the world.

Mr Rajaram admonished the gathering to focus on Gandhi’s teachings and be guided by them in all their dealings.

“We should be inspired by his principles of inclusion, which ensured no one was left behind and that of his advocacy for us to live lives of simplicity and contentment,” he added.

Dr Collins Yeboah-Afari, Director-General, Ghana-India Kofi Annan Centre of Excellence in ICT, said the world was inspired by the virtues and resilience of the late leader.

“We join the world to celebrate this day and the virtues of peaceful living and non-violence expounded by Gandhi,” he stressed.

Dr Yeboah-Afari said Ghana had a strong partnership and collaboration with India, and would continue to build on it for mutual benefits.

“Ghana over the years has built a stronger friendship with India, especially in the areas of infrastructure with the Kofi Annan ICT Centre being a case in point,” he added.

Mahatma Gandhi was an Indian lawyer, anti-colonial nationalist and political ethicist, who employed non-violent resistance to lead the successful campaign for India’s independence from British rule and inspired movements for civil rights and freedoms across the world.

Moody’s also downgrades Ghana to junk due to macroeconomic deterioration