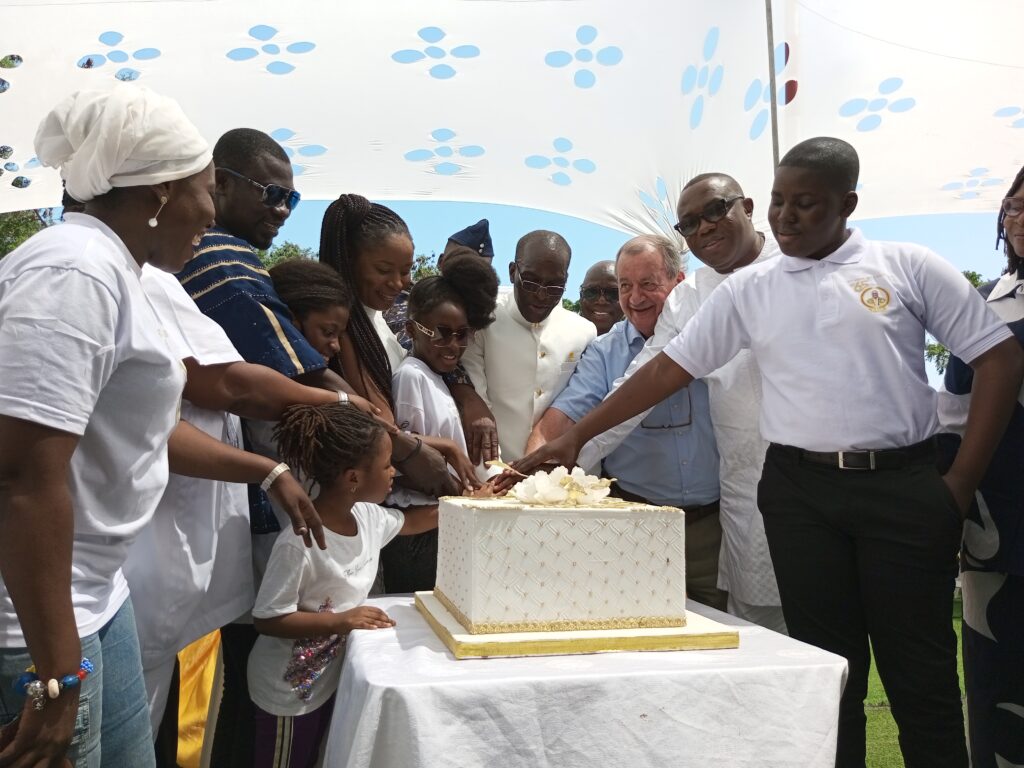 Speaker Alban Sumana Kingsford Bagbin Saturday celebrated his 65th birthday with children of the Hopeland Training Centre at Adjei Kojo in the Tema West Municipality of the Greater Accra Region.

Supported by his wife, Linda Ofosuah Oboh, and two children, the Speaker presented a cheque for GH¢50,000.00 and assorted items worth GH¢50,000.00 to Reverend Brother Cosmas Kanmwaa, the Director of the Centre.

The items were eight jerry cans of Frytol, 20 bags of rice, two bags each of maize and sugar, three bags of gari, a bag of beans, cartons of soft drinks, biscuits, 50 bags of sachet water, 20 packs of bottled water,toiletries, and detergents.

Mr Bagbin, who hails from Sombo in the Upper West Region, was born on September 24, 1957 to Mr Sansunni Bagbin and Mrs Margaret B. Bagbin, both peasant farmers.

He attended the Wa and Tamale secondary schools and the University of Ghana, where he

obtained a Bachelor of Arts degree in Law and English in 1980.

He proceeded to the Ghana School of Law, Makola, Accra, after which he was called to the Bar in 1982.

He has an Executive Masters in Governance and Leadership from the Ghana Institute of Management and Public Administration.

Mr Bagbin expressed gratitude to God for how far he had come in life.

He said his journey in politics from being the Member of Parliament (MP) for Nadowli Kaleo; 1993 to 2021,  and subsequent election as the Speaker of Parliament was a miracle.

“My entry into politics itself was a surprise to many, well they said I was not cutout for politics. My colleagues…said they were surprised to hear I have entered into politics, because I was one of the very quiet gentle souls during formal education,” he said.

“My rise in politics was not through my efforts, but it was through God’s grace…”

Mr Bagbin said he was unanimously elected as the Speaker of the Commonwealth Parliamentary Association this year; adding: “God is good; all the time. All the time, God is good. He is merciful, gracious, and loving”.

Though he went through tough times in 2021 with regard to his health, the storm was over and he thanked God for the abundant blessings.  Mr Bagbin commended the Catholic Church for the  support to deprived  children such as those at the Hopeland Training Centre to impact on their health, education and moral upbringing.

“..These depraved and neglected children, I can tell you, we are not better than them. We are here because some people have taken action to try and claw back the lost to society.”

The Speaker advised them to take their studies seriously to excel.

Rev Kanmwaa, on his part, expressed gratitude to Mr Bagbin for the kind gesture, which, he said, was a reflection of his love for the poor.

Hopeland Training Centre is one of the six departments of the Catholic Action for Street children (CAS), a local non-governmental organisation established in 1992.

It is to provide support to children living on the streets of Accra, Ashaiman and Tema.