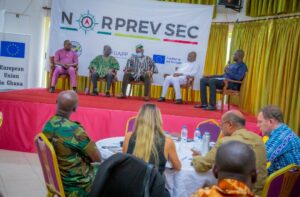 The European Union (EU) has launched the third component of a security programme aimed at preventing pre- and post-electoral violence and counter violent extremism, terrorism, and organised crime in the country.

The programme, dubbed: “Preventing Electoral Violence and Providing Security to the Northern Border Regions of Ghana (NORPREVSEC)” is being implemented within 27 months in the Northern, North-East, Savannah, Upper East and Upper West regions.

It would develop three lines of action: reducing the risk of political violence, peace building and early prevention systems, and strengthening the Ghana Police Service in intelligence, prevention of radicalism and violent extremism.

It is funded by the EU and implemented by three actors in parallel to tackle the fight against terrorism from all possible angles.

They are the National Commission for Civic Education, leading the processes of public awareness, COGINTA, a Swiss non-governmental organisation supporting government and non-governmental actors to resolve conflicts and reduce violence, and the Foundation for Public Policies and Administration, a Spanish cooperation entity.

Mr Irchad Razaaly, the EU Ambassador to Ghana, who spoke during the launch in Tamale, said empowering civil society and local NGOs through their involvement in NORPREVSEC would help tackle violent extremism and radicalisation, especially among the youth.

The launch was attended by the relevant security agencies, representatives of Civil Society Organisations, local government authorities, community stakeholders, and international actors such as Interpol, Europol and Frontex.

Although the country had not recorded terrorism, regional and world dynamics have been shifting in recent years exposing the country to new security challenges.

This has necessitated the programme, under which national and international experts would cooperate to minimise the terrorist threats in the five regions of the north, build resilience and secure peace, he said.

Mr Jose Javier Gutierrez Blanco-Navarrete, the Spanish Ambassador to Ghana, said: “NORPREVSEC will contribute to peace and stability in the northern regions of Ghana and prevent violent extremism and terrorism.”

“This a threat of growing concern particularly because of the spill-over from the Sahel. Spain is committed to fighting against this scourge in Ghana, in the region and globally.”

Alhaji Shani Alhassan Saibu, the Northern Regional Minister, lauded the programme, saying it had come at a right time when national efforts at maintaining security needed to be strengthened.