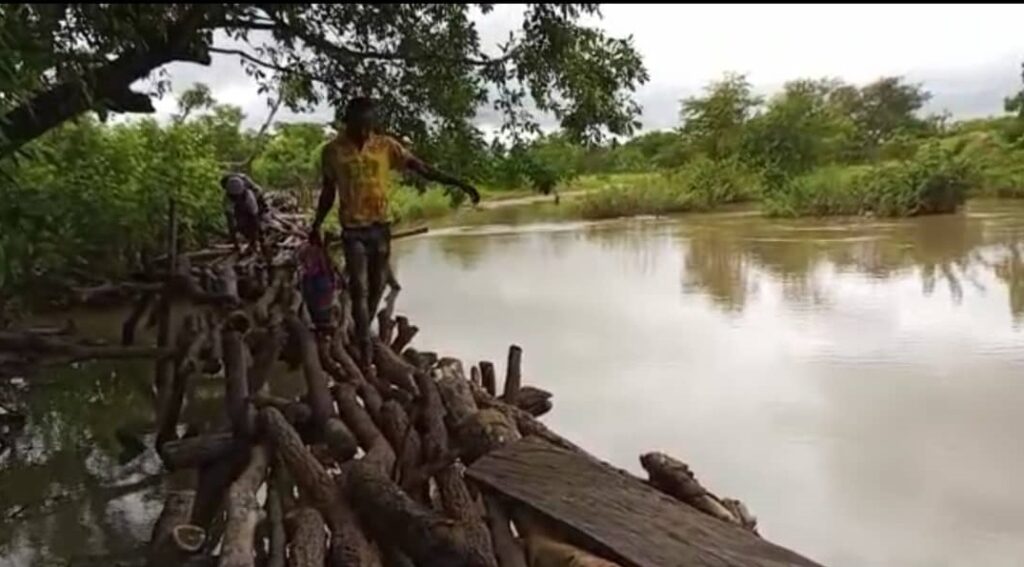 The residents of Olli and Nanvili communities in the Wa West and Nadowli-Kaleo Districts respectively live in danger as they use a “log constructed bridge” before accessing socio-economic services in both districts.

Speaking to the Ghana News Agency in an interview, some residents said the bridge over that river had been used for so many years and their pleas to the government to rectify the situation had fallen on deaf ears.

Some lives, according to the residents had over the years been claimed there, but because they had no alternative roads, they continued using it.

Mr Moses Gor, a resident of Nanvili told the GNA that “My brother ever fell in the stream and died.”

“One of them also fell here and if not because he could swim, he would have also died. This is the shortest route between the two districts. If you will not use this road then you must pass through Wa, which is an exceptionally long journey,” he added.

This became known when Madam Vida Diorotey, the District Chief Executive (DCE) of the Wa West District, visited the site, assured the people that she would work to ensure that the road was rehabilitated, and a bridge was constructed over the river.

The DCE, who acknowledged the proximity of the two districts through that route, said “I ever received video footages of this river, but today I have come here to see things for myself. As the DCE, I will do everything humanly possible to get this bridge fixed.

“When the President came to our district, the roads minister mentioned some 23 roads that will be rehabilitated in this district and this road may be part. I will follow up to ensure that if it is not part of the 23 roads, then they will add it and work on it”, Madam Diorotey said.

Confirming the state of the road to the GNA, Mr Dassah Y. Ephraim, the Assembly Member of the Eggu Electoral Area, said a contract was awarded in 2010 for a bridge to be constructed over that river, but the contractor later abandoned the project.

He added that inquiries from the Upper West Regional Department of Feeder Roads revealed that a steel bridge was required to be constructed over that river.

He explained that children at the Olli community who attended school at Nanvili had to stop schooling during the rainy season until the water in the river subsided.