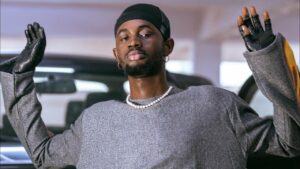 Ghanaian hip-hop singer, Black Sherif has been nominated for the Best International Flow category at this years BET Hip-Hop awards.

The Kweku the Traveller since making his way into the Ghanaian music industry, has been consistent, dropping back-to-back hit tracks for his fans.

The young talent, who was the only Ghanaian to be nominated in this years’ awards had collaborated with some top acts like Burnaboy, R2Bees, Kwesi Arthur, DJ Breezy and also gaining recognition from American record producer, DJ Khaled.

Prior to this, he also became the first Ghanaian artiste to reach a 100 million streams on boomplay.

Ghana has over the past two years missed out on the BET nomination as the young chap would hope to follow the trend of Ghanaian rapper Sarkodie who won the award in 2019.