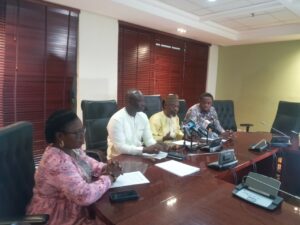 The Minority Members of Parliament have urged the government to provide the National Identification Authority with requisite resources to accelerate the pace of the ongoing Sim-Card Re-registration Exercise.

The group said there was a need for the National Identification Authority (NIA) to have more offices, recruit more staff and purchase more materials to enable it to function effectively and rectify sanctions imposed and enforced on those who had not registered their Sim-Cards.

Addressing a Press Conference at Parliament House on Friday, Mr Alhassan Bashir Fuseini, the Ranking Member, Communication Committee of Parliament, also reiterated the Caucus’s position that Mrs Ursula Owusu-Ekuful, the Minister for Communication (MOC), exhibited greater flexibility and realism in the face of the ongoing challenges.

He said the current deadlines set by the Minister were unrealistic.

Mr Fuseini, who is the Member of Parliament (MP) for the Saganrigu Constituency in the Northern Region, said: “Given that million of those who do not currently have the cards have done their part to secure it without success, the MOC has no valid reason or justification to impose punitive measures on them as is being meted out now.”

He, therefore, urged Mrs Owusu-Ekuful to endeavour to exercise a great deal of restraint or circumspection in these matters as they had far-reaching implications for the enjoyment of the fundamental human rights and freedoms of the citizens and the pursuit of their needs and aspirations in daily life.

“We are, especially concerned that the constitutional and legal freedom of the right to privacy and to pursue decent means of livelihood, could be infringed upon if we continue to traverse this path. We could run into many legal challenges and thus unduly prolong the exercise,” he said.

Mr Sam Nartey George, the Deputy Ranking Member of the Committee, said the Minister had a responsibility to the Ghanaian people to ensure there was a prudent use of the taxpayer’s money.

“If she chooses to go ahead with this illegality, there are court procedures ahead. We will fight it, we will stand with our constituents,” he said.

The Ningo-Prampram MP urged the communication minister to not roll the exercise by threats, sanctions and force instead, it should be a service for all to benefit.

He said the resort to (L.I 2111) as the basis for the sole use of the Ghana Card as an identification document was untenable as the Legislative Instrument did not make the Ghana Card the sole identity document but rather only talks of it as a principal document.

Mr Abed-nego Bandim, the MP for Bunkpurugu, said: “the minister has been entrusted with the communication sector and is bringing it down.”

Some members of the Parliamentary Press Corps also expressed their frustration at the turn of events in the ongoing Sim-Card Re-registration Exercise, especially when they had gone through the process but had their SIM cards not working.

While some said they could not receive calls, others noted that they could not make calls, carry out money transactions or use the internet (Whatsapp services).

Another victim of Appiatse explosion passes on at Okomfo Anokye