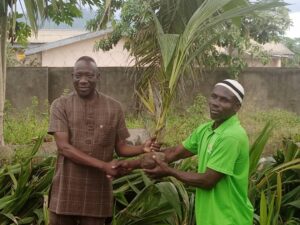 Kadjebi District Assembly in the Oti Region has distributed 1,000 Coconut seedlings to interested persons under the Planting for Export and Rural Development Programme to promote rural economic growth.

It also aimed to improve the household incomes of rural farmers through the provision of certified improved seedlings, extension services, business support and regulatory mechanisms.

He asked the youth to venture into Coconut farming as it was beneficial and economical and that prominent persons such as Ambassador Rashid Bawa, Ghana’s High Commissioner to Nigeria, Mr Michael Wullar, Oti Regional Vice-Chairman, and Coconut Farmers Association of Ghana, among others, were already into coconut cultivation in the district.

Mr Agbanyo said, as a topmost priority, the Assembly would make farming attractive to the youth.

He said the Assembly would make proper supervision of the seedlings distributed to ensure that they were well nurtured.

The DCE said farming needed commitment and that the Assembly was ready to ensure that local economic activity in the district flourished.

Mr Fuseini Ibrahim Hamidu, the Oti Regional Chairman of the Coconut Farmers Association of Ghana, urged everyone in the Kadjebi District to go into coconut cultivation as there was a ready market.

Mr Hamidu, who received the seedlings on behalf of the farmers, said apart from the importance of copra and coconut oil, which is widely used in the manufacture of soaps, hair oil, cosmetics and other value-added and industrial products, its husk is a source of fibre which supports a sizable core of the industry.

Work will resume on stalled factories under 1D1F – Minister assures