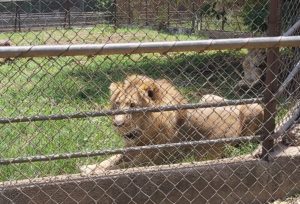 The Accra Zoo has been closed down to allow for investigations into the mauling to death of a middle-aged man by a lion on Sunday.

A yet to be identified middle-aged man was allegedly killed by a male lion at the Accra Zoo in the Achimota forest after he had allegedly sneaked and jumped into the den of the lions at about 1230 hours.

The lion was said to have attacked his throat and killed him.

Guards at the Zoo found the lifeless body of the man when they sent food to the lions.

A press statement from the Forestry Commission said the intruder had died from injuries sustained and that his body had been conveyed to the morgue.

It said: “Accra Zoo authorities successfully coaxed the lions into a secure hold and invited the Achimota Police to convey the body and commence investigations.”

The statement said, the lion, the lioness and the two cubs remained secured in their enclosure at the Zoo.

It said Mr Benito Owuso Bio, the Deputy Minister of Lands and Natural Resources and Mr John Allotey, the Chief Executive of the Forestry Commission, visited the Zoo to ensure all facilities remained secure.

The Minister had confirmed the incident and said the lions were well protected.

He also urged the public to disregard rumours that the lions had come out of their enclosure.

Accra Zoo is in the Achimota Forest and has many animals, including lions and monkeys.

Meanwhile, a wildlife expert said lions had gone extinct in Ghana due the degradation of their habitat over the years.

Mr Joseph Afrifa, a Wildlife Expert, told the GNA that the reproduction rate of lions was low and that they usually preferred a large range of savannah vegetation.

He said lions were aggressive in nature but were able to interact with humans when trained.

Mr Afrifa said lions feed on mammals such as elephants, buffalos, antelopes, and livestock and feed between 21 to 22 hours.